A kid from the neighbourhood who I hung out with regularly asked me one day if I'd like to come over to his house to listen to a new record his older brother had bought, I eagerly agreed. I don't remember anything about this kid, not his name or what he even looked like, but I can vividly remember the small, cramped, dark & dingy living room in his wee townhouse on craigleigh crescent in bramalea. The place was decorated to the nines with the typical kind of  tacky 70's decor you'd expect from that era.


I sat my little behind on a brown, orange & beige plaid couch. My friend walked over to me and handed me a vinyl record in its sleeve. I loved drawing but had not been exposed to much art outside of what was in the pages of my colouring books, but this had to of been the greatest piece of artwork I had seen in my life! The year was 1977 and the only records I had ever seen were the ones my parents owned, which consisted of bands like the Beatles, CCR, Boney M, the guess who & led zeppelin. This was the most extreme record I'd ever gazed upon and I was DYING to hear what kind of sound dwelt within its thin, cardboard walls. The lp was entitled "destroyer" and it was the 4th studio release from a band I had never heard of who were billed as "the hottest band in the world.....KISS!!!" 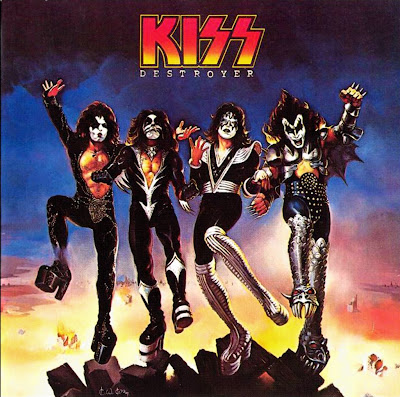 As far as fonts go I can recall loving the sleek simplicity of it, the way it was coloured which I associated with fire, but the coolest part was how the letter "S" was somewhat shaped like a backward "Z" making it similar to a lightning bolt. I know KISS are pretty tame compared to today's standards, but to a four year old kid in 1977 they were mysterious, intriguing, and the toughest 4 men on the planet!....not to mention they had the coolest gimmick! (looking back now they were like a GWAR of the 70's in my opinion) Considering the record was called "Destroyer" and depicted them as the only survivors of a post apocalyptic world... they had to be tough! Right? Destroyer also gave me the impression that not only were they sole survivors, but they were also the ones in question who had  "Destroyed" everything.! In my eyes these guys were bad ass and nobody could fuck with them!!! Although I'm sure I didn't word it like that in my head at that age!

My friend (the nameless kid) took the nice, shiny, black, vinyl disc out of it's beautiful encasement, and the first song he put on was "Detroit Rock City" a true life song written about a KISS fan who died in a horrific automobile accident en route to a KISS concert. It started out with a newscaster talking about a car accident, and when the song finally kicked in something strange and new happened inside of me.  This sound was something I had never heard before, it was loud, catchy & VERY up beat, and instead of sitting in a trance like I normally did while listening to music, I was jumping all over this kid's couch like a crazed lunatic! At the end of the song there was a sample/sound effect of a car crash....I had never experienced anything like this in a song before and it blew my mind! I truly believe that car crash to be a pre-cursor to my obsession with samples in songs. It was official, music did not sooth the savage beast and KISS was the heaviest band ever!!!......but only until December 25th, Christmas day, 1978.....or was it 1979?
Posted by Kabal at 13:10