Happy New Years! I'd like to quickly wish each and everyone of you a happy 2016, and I hope it's a great year for you all like I am anticipating it to be. For my resolution I am going to try and post at least once a week. Let's hope I can stay true to that. Now let us continue on with the story of "Heavy Ghetto"...

So we had been in our new place a few months now. Waller had moved back to Vancouver so there was a bit of an emptiness in me, but thankfully the birth of Black Belt Jones had reinstalled me with a passion that burned brighter than ever. We had been writing songs and jamming frequently, and we were now ready to hit some clubs for live performances. Before we could do that, it was essential that we recorded a demo tape so we could give club owners and promoters a preview and taste of what we were all about.

I had long returned Derek's four track recorder to him after his sneaky disbanding of Grasshopper. Luckily for us Mike Myers had picked up a four track of his own somewhere along the line. We could now easily record a demo tape in the comfort of our new home. Mike didn't live very far from us, so he was over quite frequently. Material wise, we had about 8 songs or so, which was more than enough for a demo tape.

I honestly have no recollection of the recording process surprisingly enough considering my track record with memories, except the day Paul & I hooked the Sega Genesis up to the four track. We recorded music and sound effects from the video game "Mortal Kombat" which we then layered with beats and rhymes... a song that came to be known as "MORTALITY". Other than that it is all blank, but I do distinctly remember being in Mike C's room with him and Mike Myre. We were recording all the vinyl scratches we needed from Mike C. We also did our final mix down that day, and our demo was now ready to rock.

During the recording period I had been working on a cover concept as well as liner notes and inserts. My two best pals from middle school Sanjai & Jay Poole were still hanging out at Slayer House on a regular basis, and they were a great inspiration. Sanjai even ended up drawing the cover of the demo. It portrayed myself dressed as Black Belt Jones, delivering a decapitating kick to a falling Derek from Grasshopper. This spawned the idea of having his severed head inside the liner notes. I drew the head in pencil then used an actual type writer to layer the text over top of the image. Yes kids this was looooong before the days of fancy computers and photoshop. It was all DIY, and I wouldn't of had it any other way.

Our demo was officially completed. We printed off multiple copies of the covers and inserts, which we had to cut by hand with scissors. We bought an abundance of blank tapes from dollar stores and bargain stores all over Brampton. We had to dub every single side of every single tape from our master copy, and let me just say doing your own duplication is a very time consuming process.

While we were busy dubbing tape after tape, some other musical happenings were unfolding within our circle of friends. Wiggaz AD had also been recording at Greg's place, and they too now had a completed demo tape ready to shop around. This was great in my eyes, as we could now tackle this as a team, and even offer two bands at once, which also enabled us to double our promotion efforts.

It wasn't very long before our first opportunity came. Mike and I decided it would be best if we went back to the man who had started it all for Grasshopper, club promoter William New. Willie was genuinely thrilled to see us, and he was very excited to hear our new project. Within the blink of an eye he booked us for one of his infamous "Elvis Monday" shows that he was well known for. We ended up playing with an unknown band that night called "Rusty" who would go on to achieve mediocre success. William was a great man, and he would give anyone a chance, which was a highly admirable quality in my books.

BBJ got over really well with the crowd that night, I believe mainly because we were something new, fresh, and different. Elvis Monday's were usually booked with Indy bands generally, who played punk, rock, grunge, etc. Now that people were presented with a live funky rap band, they actually embraced the change, and the reception we received was overwhelming.

We knew we had created something special, and it was time for us to show the world...
Or the greater Toronto area at least... 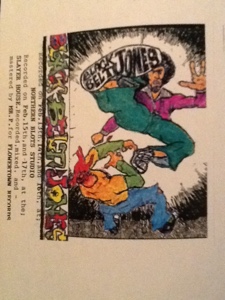 LISTEN TO THE DEMO NOW!!!