Greetings and salutations faithful readers, and welcome to a quick general update. Spring is here and it couldn't have come sooner as I'm quite fed up with this -20 degree weather on the daily. Here's hoping Old Man Winter is finally down for the count.
Two weeks ago today I was pleased to finally release a new E.P. I'd been working on for the past 7 months or so. It is a collaborative effort with DJ Moves, a name you might recognize from this blog. Moves was apart of a rap group called Hip Club Groove, whom which my old band Black Belt Jones performed with a few times in the mid 90s.
It's been an absolute pleasure to get in touch with Moves 20 years after the fact and I was glad to see he is still doing his thing. Moves has worked with a lot of artists over the years and has established a name for himself in the hip hop scene. The guy is an absolute pro, which is why I had absolutely no qualms about paying him for his production work. 5 dope tracks and a few pages of writing later equaled the completion of this latest release "East Coast Alumni" which you can purchase for digital download or stream for free via the link below.
https://kabal.bandcamp.com/album/east-coast-alumni-e-p 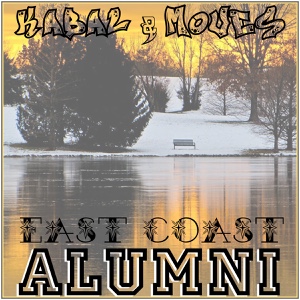 In other news I've still got two pending releases for this year. "Theokoles" which I was gearing up to release last April, suffered some setbacks and had to be shelved for awhile, but it is finally nearing completion. The LP will feature a few guests and I had a real blast producing this album. Keep your eyes peeled for that in the coming months. I've also been working in cahoots once again with "Burt" AKA Mach Spitz, to bring forth a second Street Trash release entitled "Street Trash 2: Electric Boogaloo" which is nearing its final stages of production, and that too will be hitting the streets in the next few months.
On top of all that I've been helping a few friends with guest spots on rap songs as well as hardcore songs, and as always it's a damned pleasure to work with my buddies. Needless to say anything I release or appear on will be made public through this blog first and foremost, so make sure to check in from time to time.
I thank you all once again for your continuing support and loyalty, both as readers of my blog and listeners of my music. Until next time, get out there and enjoy the weather and more importantly enjoy your life. Cheers!
- K
Posted by Kabal at 17:40 No comments: