With the tension building between band mates, Pauly decided it was time to pull the plug on Black Belt Jones. As much as I disagreed with the decision I totally understood his position, as things between him and Mike were rocky so he wanted to salvage the relationship and dissolve the band instead of salvaging the band and in turn dissolving a friendship. We still had a few gigs lined up and we felt it was our obligation to honour those dates, which we did.

Our final gig was approaching, and even though it would be our last performance as a band I was highly excited due to the venue location. We would be playing an outdoor music festival in none other than our hometown of Brampton, which really wasn't anything new as we played Brampton frequently, but this time we would be gracing the stage of the infamous Chinguacousy Park bandshell. 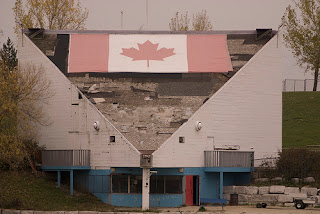 The bandshell was quite legendary in my mind seeing as it had quite an impact on my life growing up in Brampton. It was set on a small man made pond and equipped with paddle boats. At a very young age I had attended the bandshell to see fireworks on numerous occasions, as well as musical performances by mainly Canadian acts. I also experienced my first "fishing trip" there with my Dad at age 5 and we caught sunfish & catfish. As I approached my teenage years I saw myself back there a few times with my Father to see live wrestling shows. When I became a teenager I was frequently at Ching Park skateboarding and yes we did used to skate the bandshell stage almost daily.

In the late 80s the bandshell wasn't seeing much action, and being that it was outdoors it had began to rot and wither away. As the 90's rolled in there still wasn't much action going on there musically, and when there was it didn't generally suit my musical tastes. Now here we were approaching the mid-way point of 1996 and I was standing on this stage with my band facing a fairly large audience.

I saw a few familiar faces in the crowd, even my girlfriend Jenny's father Bruce was right up at the front of the stage grooving out, but for the most part we were literally playing to a sea of strangers. Just regular everyday Brampton common folk who wanted to break the monotony and treat themselves to something different for a change. There were all walks of life, parents, grandparents, and children of all ages. We received a warm reception and it felt amazing to be up there giving back to the town that gave to me for years and years, even though inside I was still hurting knowing this would be our last gig. I didn't want this day to end.

Shortly after the big show (and the break up) I was shooting the breeze with Pauly one day and he informed me that he had been contacted by some bigwigs involved in the Tibetan Freedom Concert. Turns out we had made a noise after all and they were interested in us becoming a part of it.

(From Wikipedia, the free encyclopedia)

Tibetan Freedom Concert is the name given to a series of rock festivals held in North America, Europe and Asia from 1996 onwards to support the cause of Tibetan independence. The concerts were originally organized by the Beastie Boys and the Milarepa Fund. The idea for a Live Aid-style concert for Tibet was conceived by members of the group during the 1994 Lollapalooza Tour.

Organized in 1996, the first concert was held in May in San Francisco and featured acts such as Red Hot Chili Peppers, Björk, Smashing Pumpkins, Cibo Matto, Rage Against the Machine and De La Soul. It drew 100,000 people and raised over $800,000 for Tibetan and social justice causes.[1] Additional concerts were held until 2003, generating public awareness about the Tibetan plight, particularly amongst young people. The concerts helped spur the growth of Students for a Free Tibet worldwide.

Unfortunately unbeknownst to us, Pauly had turned down the offer. I realize we were no longer a band, but our demise was still fresh and I felt we easily could of regrouped to take part in this incredible offer. Again, I understood Pauly's position with him and Mike's strained friendship so I never pushed the issue that much. Looking back I still feel the same way I felt that day, having that crazy idea behind a door in my mind that just possibly, just MAYBE, that would of or could of been our big break...