For today's post I've decided to jump back in time to grade 5 for yet another suppressed memory that has been unlocked from my mind. It was the end of the year and I was "graduating" grade school so naturally my parents asked me what I wanted as a graduation gift. I had been introduced to punk rock that year and one aspect of it that truly intrigued me was piercing. I decided to tell my folks that for my graduation gift I wanted my ear pierced. The left lobe of course as the saying at the time was "left ear buccaneer, right ear queer" Just like when I wanted to grow my hair long, just like when I wanted to dye my hair, my parents flat out refused my request with absolutely no room for debate.

Refusing to accept this, the next day I was in the boys washroom at school with one of my mother's dull, stud earrings trying to cram it through my lobe. I think I got about half way through but just couldn't bring myself to puncture the skin. After about 10 minutes of reluctantly trying I gave up and returned back to class. When I started grade six I was shocked and appalled by my parents decision, because quite a few boys had their ears pierced. By grade seven I'd estimate about half the boys in school had a pierced ear, and by the time I got to grade eight it seemed like every boy in the school had a pierced ear....except me. 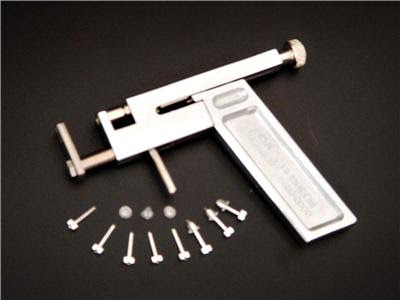 When grade eight graduation rolled around my parents excitedly announced that for graduation they were going to bring me to get my ear pierced. Their smiles quickly turned to frowns of disbelief when I responded "No I don't want an earring anymore" Their faces were shocked and puzzled to say the least. They just couldn't grasp or understand why I no longer wanted something I was so gung ho about getting a few years prior. To satisfy their curiosity I explained it as simply as I could.

"When I wanted it nobody had one and I wanted to be different and unique. Now that everybody has one I don't want to follow the trendy crowd and be like everyone else. Not having an earring now makes me different and unique from all the other boys" I stood by my beliefs and was granted a choice of what I wanted for graduating. Once again I requested to grow my hair long and surprisingly they agreed with no argument. To this day I have still never pierced my ear and I highly doubt I ever will...
Posted by Kabal at 12:31