I apologize for my lack of posts and late updates the past few days. Due to circumstances beyond my control I was unable to write anything. Sometimes life gets a bit hectic and I just don't have the time to write. I guess this post will be current events to bring everyone up to speed.

For starters I dropped my cell phone in the toilet at work the other day. I put it in a bowl of rice for 5 hours or so and it was working again. I plugged it in to charge as my battery was low, but it was not responding to the charge. I assumed the input for the charger still contained moisture so I put the phone back in the bowl of rice overnight. When I got up this morning the phone wouldn't even load up when I turned it on. I fear I am going to lose all my contacts.

I was also working on a new song this week which in turn led to me working on another new song unexpectedly. The first track was going very smooth until I hit a road block. I spent two hours on said roadblock and got absolutely nowhere. The future outcome of this song is now questionable. The second song unveiled itself quite naturally and easily in the span of a few short hours. It needs a good mixing but otherwise it's pretty much complete minus lyrics and vocals. I'd like to thank my best friend Jerry for giving me some input and help on the track as he was present the entire time I worked on it and his help was greatly appreciated.

I got my son Gabriel after work yesterday(Sunday) as I'm off Monday/Tuesday, so naturally I spent all my quality time with him and opted not to write a blog on Sunday night for Monday's post as I was very beat after a long seven day work week. My boy had a fall and I feared he had fractured something but it ended up him being ok. On Monday I took Gabe down to the city for the day, mainly to hit up the silver snail for some new evil dead action figures. Amazingly we bumped into one of my childhood friends John McCuish at the corner of queen and spadina. John informed me that his band the epileptic brain surgeons may be playing another reunion show in September. 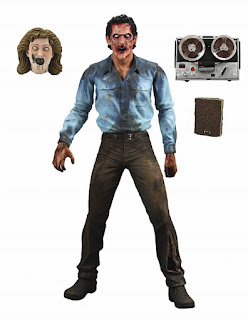 I also learned that one of my favorite movies nightbreed (see blog post "Occupy Midian") is coming back to the big screen after its debut back in 1990, this time with an extra hour of footage that ended up on the cutting room floor. I am super excited about this and it's only a month away! For more info be sure to visit: