Grade 6 was the year I went from normal wrestling fan to hardcore die hard wrestling fan. Hulk Hogan was the heavyweight champion of the world and had been for over a year since defeating The Iron Sheik at Madison Square Garden a mere 12 months ago. I like most kids my age was a "Hulkamaniac" and I was convinced Hogan was invincible. The Hulk had faced opponent after opponent for a year straight now and nobody could defeat him!

I had already found my own strange connection between rock and wrestling the first time I saw The Road Warriors wrestle, and they entered the ring to Sabbath's "Iron Man" but there was now a whole new movement starting to unfold that would prove to be the biggest boom for wrestling... It was known as "the rock n' wrestling connection" 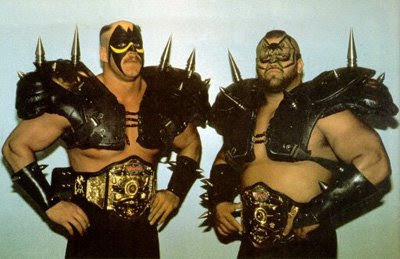 It all started when wrestler/manager  Captain Lou Albano was on a flight and he met Cindi Lauper, an up and coming female singer. The two hit it off on the flight and Lauper asked Lou to be in her video for "Girls just wanna have fun" portraying the role of her father. Lauper soon appeared on Rowdy Roddy Piper's talk show segment "Piper's Pit" where Lou (who was a heel or bad guy) insulted Lauper, resulting in her issuing a challenge. Each of them would select a female wrestler of their choice to represent them.

MTV broadcasted "The brawl to end it all" which saw Cindi's pick, Wendi Richter going up against Lou's pick, The Fabulous Moolah who had a boastful 28 year run as the wwf women's champion. Lauper hit Moolah with "the loaded purse of doom" and we had a new women's champion! Lauper continued her collaboration with the wwf and Lou appeared in more of her music videos along with other wrestlers such as Roddy Piper and The Iron Sheik just to name a couple. Rick Derringer composed a song for Hulk Hogan entitled "Real American" and the next thing you knew all the wrestlers, mainly the heels, followed suit and made their own songs which spawned "The Wrestling Album"

Meanwhile over in the awa, The warriors were still bashing skulls to Black Sabbath, and the company itself was releasing a lot of promotional videos that were accompanied by rock music. Some of the awa wrestlers even made their own songs and videos, including The Midnight Rockers and my boys The Road Warriors. I was really liking the way things were shaping up in life, two of my most favorites things were on top of the world and it seemed like it couldn't get any better....until a girl from grade 7 started talking to me one spring day...
Posted by Kabal at 07:45