My blog post for today is a current event that I'd like to bring to everyones attention, mainly fans of horror movies. As you may know my alias "Kabal" was inspired from the book Cabal and the film Nightbreed. I'd like to share some information with you in regards to the film.

(from Wikipedia)
-----------------
Nightbreed is a 1990 American fantasy horror film written and directed by Clive Barker, based on his 1988 novella Cabal. The film features Craig Sheffer, Anne Bobby and David Cronenberg. The story centers in a community of mutant outcasts that hides from humanity, known as the "Nightbreed".
Nightbreed was a commercial and critical failure. In several interviews, Barker protested that the film company tried to sell it as a standard slasher film, and that the powers-that-be had no real working knowledge of Nightbreed's story. Since its initial theatrical release, Nightbreed has achieved cult status.
Barker has expressed disappointment with the final cut and longs for the recovery of the reels so it might be re-edited. Behind the scenes footage of some of the lost scenes has been uncovered and can be seen at Barker's Revelations website 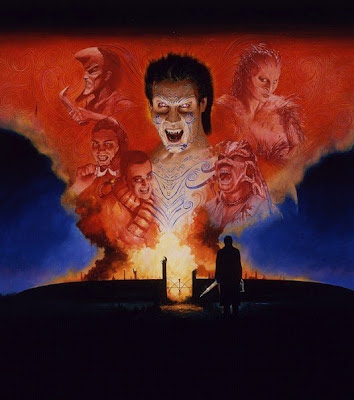 Extended cut
-------------
In 2009, Mark Miller, co-head of Barker's production company, Seraphim Films, helped track down the missing footage that was cut out of the director's cut of Nightbreed. Miller discovered, after talking to a production executive at the studio, that the footage was never actually lost but readily accessible. When asked, a studio executive said that there was not a big enough audience to warrant the studio spending money on a new, extended cut of the film. A VHS copy of Barker's 145 minute version of the film's mid-1989 workprint was recently discovered. It does not feature any of the re-shoots of Decker's murders. An extended 159-minute cut version, from another VHS found in July 2009, was premiered on March 27, 2010 as part of the HorrorHound Weekend in Indianapolis. This new version adds almost a whole hour that was cut from the theatrical release, including a musical score and more animation. In an interview, Barker said that he hopes to bring back Danny Elfman "and give us just a little bit of extra music for it."
In early 2012, Russell Cherrington, a senior lecturer in film and video production at the University of Derby, created a composite cut of the film using the footage found on both VHS tapes as well as the Warner Bros DVD. This version is the most complete version of Barker's film available and has been dubbed The Cabal Cut. The cut runs 155 minutes long and was shown at this year's "Mad Monster Party" in North Carolina with actors Craig Sheffer and Anne Bobby attending.

Occupy Midian
----------------
The "Mad Monster Party" projection of the Cabal Cut led to a renewal of interest among fans, especially on the Internet. A new petition was created and social networks were used to raise awareness for the extended cut and to encourage producers to release it. This would be colloquially known as "Occupy Midian", a term coined by actress Anne Bobby.

I wanted to draw your attention to this important petition that I recently signed:
"For a restored, extended cut of Clive Barker's "Nightbreed""
http://www.ipetitions.com/petition/nightbreed/?utm_medium=email&utm_source=system&utm_campaign=Send%2Bto%2BFriend
I really think this is an important cause, and I'd like to encourage you to add your signature, too. It's free and takes just a few seconds of your time, thanks.
- Kabal

For more info check out the following links: