Near the end of grade 6 I was sitting in class one day bored out of my mind when an announcement came over the p.a. system that caught my attention and peaked my interest. The school was starting to hold tryouts for grade 7 band class and this was my chance to finally learn to play an instrument, but not just any old instrument....the tryout on this particular day was for the drums!

I had gotten a muppet show drum kit for my fifth or sixth birthday and I think i managed to salvage it until I was seven or eight. I used to listen to my favorite records and eight tracks while I played along as best I could. The drum set was cheaply fabricated as it was made for children so needless to say the heads and cymbals didn't hold up very well over time. Other than those sessions I had never played drums again nor had any formal lessons or training but that wasn't going to stop me....or was it? 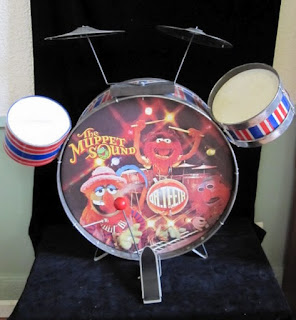 Just like the breakdancing exhibition earlier in the year, you had to go after school for the tryouts. Once again I was crushed when the bell rang and I ran to the music room to see 20-30 kids already lined up for the drum auditions. I figured all these kids already played drums or at least properly knew how to, and I had absolutely no clue what I was even doing. Defeated once again by my own insecurities, I dashed outside just to catch the bus in time and avoid a long, depressing walk home.

When grade 7 finally did roll around I ended up reluctantly selecting the trombone as my weapon of choice, which ended up being a terrible decision as it was difficult to play and was somewhat heavy to carry. Displeased with the situation I approached the teacher and expressed my feelings. When she asked what instrument i wanted to play i told her "the drums", she frowned and told me we already had a drummer which I obviously knew as the band class had been "jamming" for weeks.

We talked for a bit and pondered some alternatives and she convinced me to go with the alto sax. The teacher also was kind enough to take into consideration that it wouldn't hurt to have a backup drummer in case the regular guy missed school due to illness. The only thing I had to do was ask him to teach me how to play and report back to her in a week to perform some type of musical test. This was easier said than done as I didn't know the drummer and secretly loathed him...
Posted by Kabal at 03:30