All in all grade 6 was a pretty interesting first year at my new school Williams parkway. I had a very unorthodox teacher, I had made some great new friends, and I even managed to avoid getting "initiated" a hazing ritual that grade 8 kids would bestow upon the new grade sixes. Luckily for me a lot of the grade 8 bullies were guys I grew up with on my street so they took it easy on me. My buddy John McCuish gave me a figure four leg lock while my friends were getting tortured by his friends. We had to make it look like no favoritism was taking place and I sold the pain with an Oscar worthy performance.

I had earned their respect at the bus stop one morning when a grade 8 kid was insulting me. Something clicked inside and I threw a HUGE right hook to his temple, which shocked and stumbled him back. He regained his composure and jabbed me right in the nose causing bleeding and a slight fracture. Then he started sucking up to me so I wouldn't squeal on him and I was even invited to sit in the backseat of the bus with the grade 8 kids. I kept my mouth quiet when we got to school and respect was earned for not being a "rat".

All kinds of great music came out as well including new records from AC/DC, David Lee Roth (who had gone solo from Van Halen), Dio, Helix, Kiss, Mötley Crüe, and Ratt to name a few. And as expected most of these albums hit songs came with flashy new music videos that I was well prepared to record on the new family VCR. While filming videos one day I discovered a new band from Ottawa named Exciter and the song was called "Violence & Force" they were very fast and very heavy and decked to the nines in denim, leather, studs and spikes. They also had some loooooooong hair! 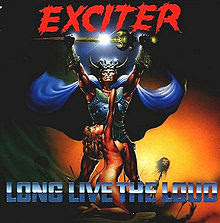 Exciter would be my first introduction to "speed metal" which would lead me into "thrash metal" a mere 2 years later. There were also two videos played in the rotation with Exciter from two bands that shocked, intrigued, and frightened me all in one. I didn't even know if I should be watching them as I felt like God was going to strike me down...
Posted by Kabal at 10:07