In grade 6 I started going to parties that actually had girls at them, and the most popular game was spin the bottle. I ended up in a few closets in my time and the thing to do was French kiss and perhaps cop a few feels. Once in awhile I'd end up in there with a girl I wasn't interested in, so I'd just opt to talk to them for the two minute duration as per the rules of the game.

Sometime during the late winter/early spring I met a new girl named Tammy who I quickly became involved with. I don't remember exactly how we met but I believe she came up to me on lunch one day and started taking to me, and the rest was history. We used to talk on the phone every night and the coolest part was she loved wrestling and was just as excited for the upcoming debut of Wrestlemania as I was.

On lunch I decided not to join the guys anymore on our daily excursions to Mackay Plaza, instead it was off to Tammy's house which was right across the street from the school. I think I may have been the only kid I knew of in sixth grade who was making it to second base every day on lunch. The fact that my girlfriend was a year older than me and in the seventh grade definitely helped the cause as well as my reputation. Every time I went to a party now I didn't need to partake in playing spin the bottle, as I was already off somewhere in a dark corner with my girl.

A new kid came to our school mid way through the year and wouldn't you know it he picked my girl to harass. Rumor had it he was supposed to be in Grade 9 but he had been held back a few times. Rumor also had it that he was a tough son of a bitch as well as crazy....AND a Satan worshipper! I heard he had brought beer to school and drank it on lunch then proceeded to break the bottle and start cutting his arm with broken glass claiming he felt no pain because he sold his soul to the devil.  I don't know wtf I was thinking but I called him up and told him "stay the fuck away from my girl or you're dead!" then I hung up the phone before he had a chance to respond. The next day at school he came right for me but it was at the end of recess and I was saved by the bell. Somehow I managed to avoid this kid for the rest of the year even though word was out that he wanted my head. 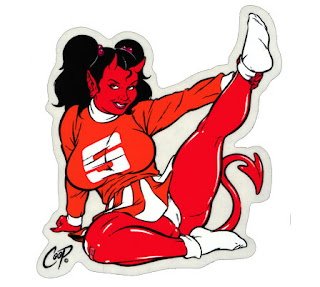 Tammy eventually dumped my ass sometime during the summer after I finished grade 6 but that kid had it out for me for years to come. When I started grade 7 he was in grade 9 at North Peel and the pressure was off for the time being, except I kept running into him at places, most of which were public ones which served great for my well being. He ended up crashing through a plate glass window in the mall being chased by security guards which in turn sliced his arm open so badly it was virtually rendered useless for the rest of his life. Needless to say I wasn't sweating him anymore...
Posted by Kabal at 03:10