We had three couches in our living room formed in the fashion of a horseshoe. At the opening of the horseshoe was our entertainment centre. We had of course a kick ass stereo, TV, VCR, and the hottest game console at the time, Sega Genesis. It was common for 5-10 guys to be occupying that space, usually playing video games with 5 different CDs in the carousel busting out our favourite tunes. It wasn't very often we actually watched television, but the odd times we did that year we were witness to some amazing historical happenings.

Firstly were the Los Angeles riots, sparked after an African American male named Rodney King was beaten relentlessly by LAPD. Unknowing to the police someone was videotaping them, and it was major headline news before Mr.King's blood even dried on the ground. The officers in question were found not guilty in court, which led to absolute madness in south central Los Angels. Lootings, fires, random pedestrian beatings, all being televised. I was glued to the TV set with my VHS tape recording it all over the course of the weekend. And what did the police do? Absolutely nothing. They sat back and let these people destroy their own city. It was one of the most surreal things I'd ever witnessed in my life.

Roughly two months later we found ourselves glued to the television once again. It was one of those rare occasions that I actually decided to flip through the channels, only on this particular day every channel seemed to be airing the same thing; a high speed police chase on the LA freeways. The LAPD were in pursuit of a white bronco, which we were shocked to learn was being driven by none other than O.J.Simpson, a famous ex-football star and actor. We were all mesmerized to learn he was wanted for questioning in regards to the death of his wife and her friend. Once again it was absolutely a surreal situation watching this chase, which felt like it lasted hours. Eventually it came to an end, and OJ would go on to be found not guilty in what was one of the highest profiled Supreme Court cases in the history of United States law.

Just when the year seemed like it couldn't get any crazier, it did, years prior there was an alert in our area warning residents of a man labelled "The Scarborough Rapist" so whenever we were out drinking in parks and whatnot, we always had our eyes peeled for the Nissan car he apparently drove. Now the man has been caught for several rapes and murders. His name was Paul Bernardo, and he did not act alone, his girlfriend/wife Karla Homolka was also involved. The trial was subject to a publication ban which applied to Canadian newspapers and media, and the venue was moved to Toronto from St. Catharines, where the murders occurred. There was however no publication ban in the U.S., and a friend of Greg's father had been sending him copies of the court transcripts each day, which we were lucky enough to aquire. It was mind blowing to read all the details involved in the gruesome case.

I could only wonder what the second half of the year would hold in store...

With another May two-four passed, it brought with it once again a world of new music, experiences, ideas, and influences. I can't remember if it was prior or shortly after, but the band known as Sweetgrass came to pass. Yet another solid Brampton band was put out to pasture. I'm not sure exactly why they broke up, nor did I ever inquire as to why, but I suppose as all good things it had to come to an end at some point. I had only ever seen them perform once or twice, and although they weren't my cup of tea per say, they were a hell of a solid band. 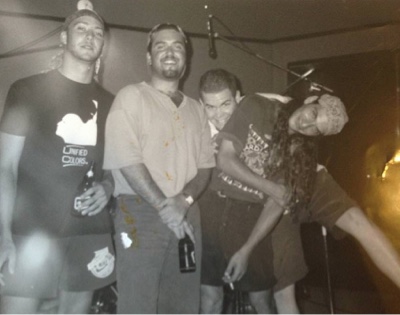 
On the plus side of things, we were seeing a lot more of Greg now, who'd come by quite often and bless us with his presence, and guitar playing from time to time. I assumed now that Sweetgrass was no more, it would enable us to move forward and do something productive with our "Dead Homiez" project, but alas it was put to rest.

Greg ended up getting together with former EBS drummer John McCuish, and a fellow named Rob Clarke who was learning to play the bass through Greg's tutelage. They kept the whole thing on the down low, until showing up one day with a four track recording of a song they'd created called "Carnivore" The track was essentially poking fun at the former girlfriend of a mutual friend of ours. The track they created weighed heavily in both musical aggression and humour. The boys all shared the vocal duties since they didn't actually have a singer. We all quite enjoyed it, and they vowed to make more music.

Speaking of music, we were still trying to get Black Belt Jones off of the ground, but it was difficult considering our work schedules conflicting and other factors such as girlfriends, our radio show, and life in general getting in the way. I still needed some form of musical outlet, so I turned to Mike C's DJ setup in the basement of our house. Whenever I had a free moment I'd be down there working on beat mixing and making mix tapes.

It only felt as if a few moons had passed, but Greg's new side project had already evolved into something more. Somewhere along the line John decide to bow out of the project. I'm not sure if he'd lost interest or just didn't have the time for it, but nonetheless he was done with it. Not to let things die prematurely, Greg enlisted Frank Barone, the drummer of his former band Sweetgrass. In the blink of an eye the boys were back with their second song "Death Metal Mama" which was spawned from our clowning of females that past May 24 weekend. Once again they brought forth the heaviness mixed with tongue in cheek comedic lyrical content, and like the previous song, Greg & Rob shared the vocal duties and another classic was born.

The guys kept at it and seemed to show up every week with a new song to premiere for us. They stuck to the formula that worked best for them: jam at Greg's, create a song, then sit down and find some inspiration for the lyrics. Wether it was their homeboys, spray cans, cheesy CDs, or the devil himself, they kept coming forward with song after song, all of which were gold in our opinions. The only thing now pending, was this power house trio was lacking a title.

We sat around shooting the shit one evening and began brainstorming ideas. We had recently gotten into the habit of calling each other "Wiggaz" "Sucker Wiggaz" and "Death Metal Wiggaz" since we all loved metal and rap music respectively. I had always referred to where we lived as "South Central Brampton" in ode to the group N.W.A. who were from South Central Compton, so a simple marriage of words came to mind "South Central Wiggaz" or "S.C.Wiggaz" for short.

The boys officially had a name, but unbeknownst to us at that moment, it would be a name that would morph as time passed on...
Posted by Kabal at 10:25 No comments: