Back to the Rock n Wrestling connection. Things were booming yet sadly all the independent territories were being absorbed by Vince McMahon who was "liquidating" them all into his company the WWF. Cindi Lauper was still on the scene in Wendi Richter's corner. The former champ Moolah brought in a new protege Lelani Kai, who won the title from Wendi at "The war to settle the score" Richter regained her title at the inaugural Wrestlemania, which in itself was the greatest wrestling event ever held at that point in time

It was the Super Bowl of wrestling. Sadly back in those days there was no pay per view nor any restaurants with closed circuit tv airing it except perhaps stripjoints. Unless you had tickets or a satellite dish you were shit out of luck. I was left to wait patiently for Coliseum Home Video to release it on VHS. If I remember correctly my dad ended up getting us a copy from a guy at his work. Wrestlemania destroyed my senses it was that good, or at least it seemed. Looking back now a lot of the matches were forgettable to say the least. Quite a few celebrities were involved including Muhammed Ali, Liberace, and even my first role model Mr.T was apart of the magic. 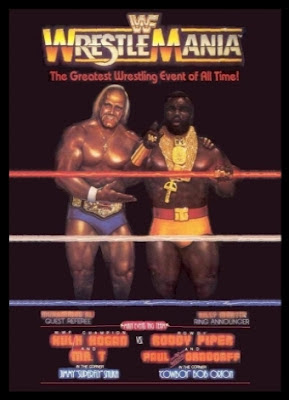 Wrestlemania was a huge success and wrestling was the newest, hottest commodity in sports. Hulk Hogan appeared on the cover of sports illustrated and was billed as the 3rd highest paid athlete in all of professional sports.  NBC saw the explosion and jumped on board. They started randomly airing "Saturday Nights Main Event" in place of Saturday night live, which consisted of pay per view quality bouts as opposed to all the squash matches you'd see on weekend afternoon programming.

There was also a cartoon show launched called "Hulk Hogans Rock n' Wrestling" that aired Saturday mornings in the toon rotation. It wasn't the greatest cartoon by any means but it had little skits between commercials and what not that were filmed in live action with the wrestlers themselves in the flesh. That was pretty cool in my books. I can remember just videotaping those clips of the show specifically as it was really the first time I was seeing wrestlers outside of wrestling.

Late that year on SNME, the 3rd episode ever to be precise, there was the premiere of something that would take rock n wrestling to the next level...
Posted by Kabal at 03:20