So while I was writing last nights blog I came to the realization that there was another record Jamie gave me for Christmas. It was somwhere between the AC/DC record and the Iron Maiden record. Sorry folks but x- mas 83' will have to be saved for another day.

So that particular year (1981) there was yet another record that would define my musical tastes. The record was entitled "Paranoid" from another UK band named "Black Sabbath" The cover wasn't anything too special or eye catching, but the sounds inside were. This album was packed with great songs and once again there wasn't a song I disliked on the entire lp. 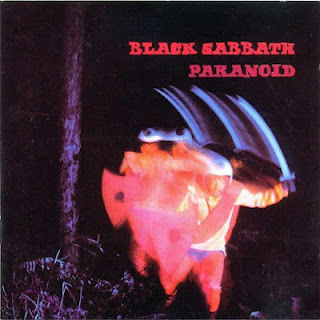 Sabbath were an older band from the 70s even though I didn't discover them until the 80s, by which time their lead vocalist Ozzy Osbourne wasn't even apart of the group anymore. He had gone solo with his own new band. Right around this time I conviced my mom to buy me a "Hit Parader" magazine (think teen beat but for metal heads) and I was shocked to see Ozzy in the centre fold sporting a newly shaved head! Here I was dying to grow my hair and for the life of me I couldn't understand why he would cut his locks off!

Two brothers who lived around the corner from me had a live Ozzy record called "Speak of the devil" it was a double live record packed with evil imagery and even contained Ozzy performing a few Sabbath songs with the new group. If I recall correctly we also watched "quest for fire" on that day and were giddy over all the cave people nudity and sex.

I quickly hit up "Sam the record man" in the Bramalea City Centre, but could not afford the record. I did however find a 45 that contained 2 songs from the album and it only cost me a whole $2.00! Once again I played it religiously until the grooves wore thin.  Black Sabbath and Ozzy Osbourne introduced me to a new element of metal......The Devil!
Posted by Kabal at 03:17