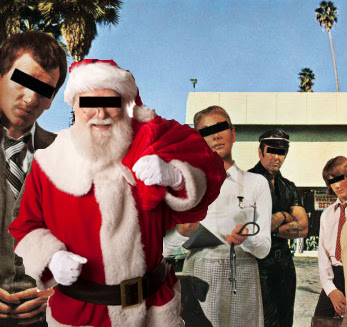 My memory is a bit sketchy on wether it was 1978 or 1979 when I was introduced to my new favorite band. I know I was 5 or 6 years old and like any kid that age I was super psyched for Christmas! We had the same tradition every year. My sister Christine and I would get up VERY early, usually about 5 am. We would sneak downstairs quietly and inspect the contents of our stockings, making sure to put everything back just the way they were..

We would then take a quick peek at what Santa had left for us. My folks used to leave the most expensive gift from "Santa" unwrapped so we knew exactly what the big guy had gotten us. If I remember correctly I got something star wars related. We would then go back to bed until 6-630 am before we went and woke up the rents.


After opening all of our gifts we would get ready and head to my grandparents ( on my fathers side ) for more gifts and an extravagant huge lunch. Then after that we would head over to one of my mother's sister's places for even more gifts and a tasty Christmas dinner.  My mom and her 2 sisters both had two children, making it 6 kids in total. Myself and my sister, Gord and Trisha, & Jamie and Jason. Chris, Gord & Jamie were all the same age. Trish was a few years younger, Jason and I were 6 years younger than the oldest three, and yours truly was the "baby" of the family, as Jason was born in October and I in January.

My cousin Jamie gave me my first vinyl record for christmas that year, "dirty deeds done dirt cheap" by a band from down under called AC/DC. As soon as the needle dropped it was love at first listen! The guitar sound was very raw, the drums were hard hitting, but what really got to me was the awesome, raunchy, guttural vocals which were delivered by the late, great Bon Scott. R.I.P.

I played the album religiously and there wasn't one song on the record that I disliked, although I don't think my mom was very happy with me rocking out to "Big Balls" HA! I clearly remember that the song "Ain't No Fun (Waiting 'Round to Be a Millionaire)" was the first song I EVER heard a curse word in...and not any old curse word either....it was the F-bomb! However the stand out track for me was "rocker" the fastest song I had ever heard to date! It was MY song and the crazed lunatic was back terrorising chesterfields again, but this time with a badminton racket for a guitar! My dad used to kid around and say the song "problem child" was my song....little did he know his friendly joke would eventually become a reality... 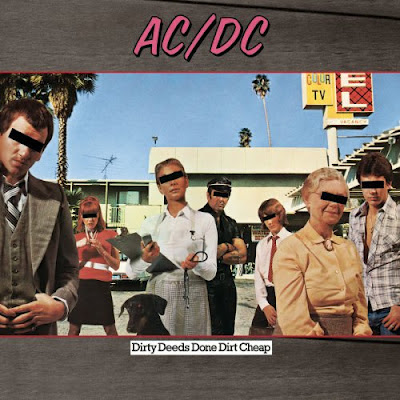