Just like my first AC/DC record, this one was packed with great hits and there wasn't a song I disliked once again.  "Can I sit next to you girl" was one of my faves, is was somewhat a love song... in a macho, cro-mag kind of way. Another song that was on a much slower blues trip I enjoyed immensely was "the jack" and I STILL love grooving to it to this very day.  And yes, yet another rocking tune my mother didn't appreciate hearing was "she's got balls"

However, the one song that hit me the hardest and would essentially be the soundtrack to the movie which is my life was called " Rock n' Roll Singer" If you are not familiar with the song allow me to share the lyrics with you; 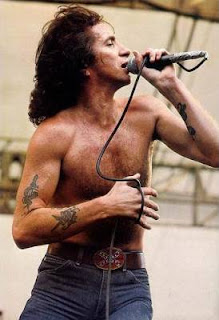 This was a defining moment in my life and much to my parents distaste, I knew what I wanted to be when I grew up! Bon Scott was the man and he told it like it is AND he was my first role model come to think of it!  The days of couch and bed jumping were gone as I had graduated to the next level and an even more embarrassing thing to do when I listened to my records....sing in the mirror!

While writing this blog tonight I rekindled the memory of a friends birthday party I attended around this time. I got him an AC/DC records as a gift, and he told me a few days later his parents didn't allow him to keep it. I always considered my parents the reason I turned out the way I did as I was sheltered from a lot of things and not allowed to do rad stuff like dye my hair or pierce my ears, but I realize now that I was also given a lot of freedom like: caring for myself after school from a young age, watching movies that were anywhere from pg to r rated, and the most important one of all.... The freedom to listen to whatever music I wanted, and I love them for that & could not ask for anything better!

So not only had I found my favorite band, but I had found my new favorite singer! High Voltage actually came out in 75' but I was too young to pay attention to such things at the time.  There was an older kid on my street named John McCuish who was a huge AC/DC fan and I think he had a soft spot for me as we shared the same mistress! We would go on to be long time friends. I believe he was the one who took the wind out of my newly flapping sails when he informed me that my new favorite singer had passed away while I slept that previous night...
Posted by Kabal at 03:21