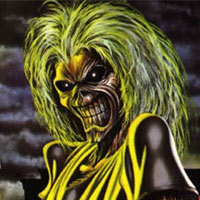 This was the coolest album cover I had ever seen before and the artwork was just fantastic! It portrayed the band mascot "Eddie" (an undead metal head) manipulating the devil via marionette strings. The devil also had marionette strings from his hand controlling a smaller Eddie, who was bringing fire and chaos to the people of earth. I never really understood the concept and still don't to this day, but it's still awesome! The way I saw it, Eddie was REALLY in control of the devil who thought he was in control of Eddie.

Regardless of my theories, Eddie was the coolest ever and became the focus of my illustrations. Musically I still liked AC/DC better but Maiden brought a lot to the table. They had very upbeat, heavy songs that always gave me the image of mighty stallions galloping along a dusty trail en route to battle! The singer Bruce Dickenson had a brilliant voice and was able to hit very high notes. He also had incredible screams that he seemed to be able to hold longer than any other human being.

Another thing I really dug about these guys was their image.  Unlike AC/DC who were jeans & t-shirt kinda guys, the boys in maiden had a bit more flare. Leather pants, high stop sneakers with the tongues hanging out, wristbands and arm studs AND they had VERY long hair! All in all however, Eddie was the selling point for me. I found it so unique and amazing that a band had a mascot.... And not just any old mascot, they had an undead killer!

So now I found myself drawing Eddie whenever pencil was in hand and I got pretty damn good at it! In the beginning I had to use my record for reference, but after so many drawings I was able to sketch him freehand anytime I wanted to! Looking back now, Eddie is probably the one image I have drawn more than anything in my entire life!

Another new thing on my metal agenda was finding arm studs! I would scour malls and flea markets all over Brampton searching for black leather wristbands adorned with silver studs, yet I could never find full arm ones like the boys in Maiden wore. The only type available anywhere were 2 rows of studs. Not one to be bested, I decided to get a few of them and wear them all on one arm to give the illusion of a full armband. I was starting to fit the "metal uniform"more and more, now I just had to convince my parents to let me grow my hair long...
Posted by Kabal at 05:23