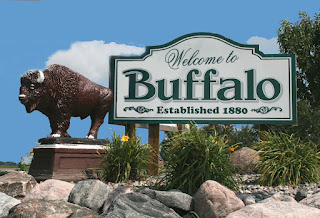 My parents liked to take my sister and I on car rides from time to time,which eventually led to longer road trips as the years went on. We went to buffalo quite often, including niagara falls and I absolutely loved the place! I have many fond memories from our various trips there. I remember the car ride being very long and boring , but once hitting the border and crossing the bridge came I would get super excited. As far as the falls go on the Canadian side, I thorougly enjoyed the wax museums and the haunted houses, which were very scary yet fun as long as my dad was close by. I was also a big fan of the ripley's museum, mainly the human oddity aspects within.

The falls were also an incredible sight to see! I remember the fear and excitement I felt watching the powerful waters rush beneath me. The tales of crazy/courageous men who braved the falls fury inside of barrels astonished me immensely and it was such a cool feeling to be standing where Superman saved a falling kid in the 2nd movie! I walked across the bridge from Canada to America by myself as well and that is something i will always remember too!

There were many trips and many memories but the most profound one is from our first trip there in 1980. We were in some mall somewhere on the American side and I was a bit displeased that I wasn't finding any cool toys or anything...until we stumbled upon a record store. I immediately went to the "A" section and found the AC/DC tab. They had a few different ones but the album that stuck out the most was "High Voltage" if I remember correctly it was somewhere between $7-14.00 USD. My folks reluctantly allowed me to get it and I could not stop staring at it nor could I wait to get home and listen to it! 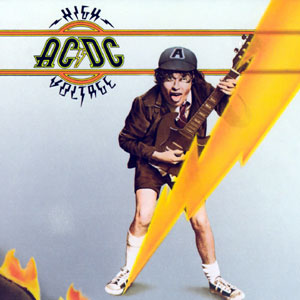 I was enamoured with the cover image of a grimey kid named Angus who was wearing a disheveled school uniform and playing his guitar, which I could never decipher between if it was A. Broken or B. coming out of his shorts like a penis! There was also a giant lighting bolt coming down right in front of him. The back cover was littered with letters from irate parents and school boards in regards to the band mates shenanigans, and I read them countless times, which brought me to a new discovery....AC/DC were MORE bad ass than KISS!

When I finally put the record on I was grooving along to "it's a long way to the top" and the ripping bagpipe solo in it blew me away! Another song that really fired me up was "T.N.T." and I clearly recall a day in grade school when the bus never came due to extreme snow so I invited my pals up to my place (while my folks were at work) and played my records for them. Now there was a whole gang of crazed lunatics jumping on the bed! There was one song on the record however that would change my life forever...
Posted by Kabal at 03:34