When I opened the gift from my new found friend I was over ecstatic when I saw the contents within the wrapping paper.... A black t-shirt emblazoned with the fabulous artwork of the Iron Maiden album "Killers" The image showed Eddie looking menacing as ever standing out on a street late at night with a bloody hatchet. There was a hand clutching onto the bottom of his shirt....presumably the hand of the victim who's blood was upon the hatchet.

This was the greatest birthday gift I had received thus far in my life.  As expected I wore it to school the next  day. I was a pretty cool dude with my AC/DC shirt, but my killers shirt officially made me badass in the eyes of my school peers. 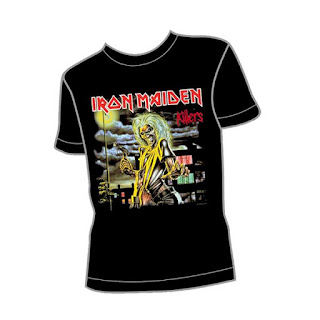 As the warmer weather rolled around my parents decided to take us to Canada's Wonderland. If I remember correctly it was the year the park opened. The rents said I could bring a friend with me so who better to invite than my new buddy who had got me the best shirt ever! My folks gave me some spending money so my friend and I went to check out some shops and we stumbled upon a store that made iron on shirts.

I ended up getting an AC/DC transfer put on with the bands logo, Angus' face & the words "hells bells" underneath. I got a second transfer put on the back that had a scary set of eyes and the caption "I'm the one your mother warned you about" Needless to say my mom and dad weren't very impressed with what I had decided to spend my money on.

Before I could say "heavy metal" both shirts seemed to have mysteriously vanish. I quickly asked my mother about it, she denied knowing anything about the disappearance. Years later when I was moving out on my own for my first time (around age 19) I was going through old boxes in the basement and I found the shirts.

Once again my mother was trying to "protect" me, but I was furious inside that she had lied to me all those years.....and of course the shirts were way to small to fit me anymore, even if they did fit I was way too "hardcore" (and ignorant) to be seen in old metal shirts at that point in my life. It pissed me off even more knowing these beauties had missed their prime wearing days.

I recall not knowing the whereabouts of my shirts was the first time in my life I had truly became depressed over something, and it wouldn't be the last time...
Posted by Kabal at 03:08