I always had an extremely vivid imagination as a child. I loved nothing more than sitting in my room alone playing with my star wars and fisher price toys. To this day I still prefer to work alone as opposed to in a group. It was that way throughout my scholastic career and I'm sure it stems back to my own personal affection towards playing alone instead of with others.

When music came into my life it was yet another activity I enjoyed in solitaire. I loved putting the big, oversized, black leather headphones on, adjusting them to my little melon head and escaping to my magical, musical paradise. Whenever I was doing such, I would tend to close my eyes and envision  images in my head that the music would conjure up. I seemed to have a knack for this and every song brought its own mental scenario, and every time I listened to those songs on different occasions my "head movies" were consistently the same.

This all changed in 1984 with the inception of the music video and a television program that changed my life forever called "Toronto Rocks" which was hosted by John Majhor. It aired at 4pm which had all the kids rushing home from school! Toronto rocks was THE predecessor to MuchMusic and MTV. Majhors played a wide variety of music videos that spanned from classics like Michael Jackson's "Beat it" to The Eurythmics "Sweet Dreams". I was being exposed to more new bands and the coolest part was I didn't need to use my imagination anymore to visualize the music I was listening to. 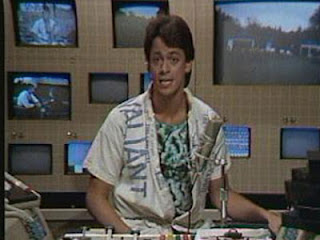 As if this wasn't amazing enough, Toronto Rocks decided to make Wednesdays "mid-week metal mania" playing nothing but heavy metal videos that ranged from glam rock hair bands to the heaviest of the heavy. I was now given access to a whole new world of metal and numerous bands that I didn't even know existed! Once again my musical tastes and inspirations were expanding, and I couldn't wait to see what new and exciting groups awaited discovery each and every Wednesday!
Posted by Kabal at 06:35