A lot of different things in pop culture defined me as a youngster growing up. As far as toys went all I needed was Star Wars. I did get into He-Man while all my friends leaned towards G.I.Joe. Another old school favorite of mine was Micronauts. 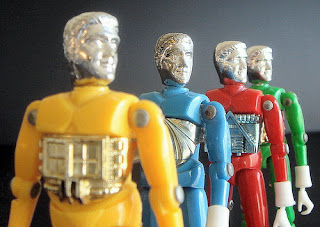 Music obviously was a factor, being bred on classic rock and heavy metal. I also grew up near a small forest, creek and a place we used to call "the pits" which served for all your outdoor needs. Swimming, hide and seek, playing army, capture the flag, etc.  The pits was also equipped with some pretty sweet bike trails as well as a "Tarzan rope" for swimmers and even an old abandoned car with "The Red Wreck" painted on the side of it, which we tried to blow up once by inserting rolled up newspaper into the gas cap and lighting it on fire. You could even fish there and disgustingly enough cigarette butts worked as bait. That was reason enough for me to never swim in there once! That and the fact a buddy of mine took a shit one time while he was swimming.

After discovering smut at such a young age, my friends and I were now on the hunt and luckily for us we always seemed to find crumpled up pages of dirty mags down in the woods. One day we hit the jackpot and found a garbage bag in a field behind my house, which is now the 410 highway between Queen st and Williams parkyway. Needless to say we had hit the jackpot and quickly brought the haul back to my place. We weren't in the backyard 5 minutes when my dad came out and busted us. Ended up our neighbor saw us through the window and quickly tipped my old man off via telephone. Thanks Mr.Reay!

Another favorite activity of ours was smoking cigarettes at a very young age. I can't remember if we actually inhaled or not but it became a daily ritual for us to chain smoke a pack of rothmans that my pal Craig would snake from his mom. A few times in the pits we discovered "weeds" that we actually thought were marijuana. We rolled them up in newspaper, fired them up and coughed our lungs out.

The pits always had dangerous excitement if you craved it too, like walking the edge of the "tits" (2 round cliff facings that were the highest points above the water) or pissing off partying teenagers and/or lovers,  causing heart racing chases through treacherous terrain. There were also urban legends of lunatic masturbators and dead bodies in watery graves.

I didn't watch much television as I was barely home and when I was home it was music videos or video games on the coleco vision. My dad had a bit of a strangle hold on the tv remote and I had no choice but to watch his boring syndication. On Saturdays he would always interrupt my cartoon viewing to watch Bob Vila's "This Old House" from 10am to 10:30. He would then return at noon to watch a sport I didn't really care for called "Wrestling" but I'd sit through it none the less as I knew "Kung Fu" was in afterwards!

One of my earliest wrestling memories was seeing a guy in a nice 3 peice suit cutting a promo at ringside in front of a live audience. During his promo a heel rival came out and attacked him with a weapon knocking the baby face unconscious. The heel then proceeded to stomp the fallen hero as he tore away at his fancy suit, eventually stripping him down to his tighty whiteys. I can recall being scared and thinking I'd never want to be apart of something that could see me humiliated like that!  It was like something that would happen in a bad nightmare, only on school grounds with a sandbox for a wrestling ring and brooding kids cheering the action on.

No sir wrestling was not for me........ not until one day when I was drawing pictures while my father watched "wrasslin'" (as he liked to call it) and the VERY familiar kick drum of Black Sabbath's "Iron Man" bellowed from the family television...
Posted by Kabal at 03:22