The summer before I went into grade 6 my mother signed me up for an indoor arts and crafts program similar to some form of day camp. The program was about 2-3 weeks if I remember correctly. The day before camp started my mother came home with something for me.... Speed stick original deodorant.

Apparently I was starting to smell funky. Although I had body and pubic hair at a young age not too mention a high libido, I had fully hit puberty now. I was getting acne and now body odor. Camp wasn't much to write home about, it was mediocre fun. My highlights were the days we went swimming and having the opportunity to steal money out of people's clothes in the locker room. I did create some pretty cool works of art and even made a friend or two.

I went into my first day of grade 6 with confidence. I had my fresh buzz cut with rat tail and I was decked out in my freshest breakdancing gear. When I got to school and started observing the other kids I was shocked to see lots of students wearing the same shirt I was and/or the same parachute pants I had on. Suddenly I didn't feel so special as I was merely blending into the crowd and not standing out like I usually did.

It wasn't long before I found myself sent out in the hallway for disrupting the class. I was leaning on the wall right beside a fire alarm and I could not stop staring at it. I had heard rumors they had ink inside them, so if you pulled it you could easily be identified. I don't know if I was over come with boredom or curiosity but the next thing I knew my finger was slowly pulling the leaver down but no alarm sounded. I removed my finger and checked for ink....nothing. I inserted my finger again and slowly started pulling the lever down again. No alarm. I was convinced it was broken and proceeded to keep slowly pulling the lever down. Before I knew it a tiny glass rod shattered and the alarm blared, causing me to jump right out of my skin! 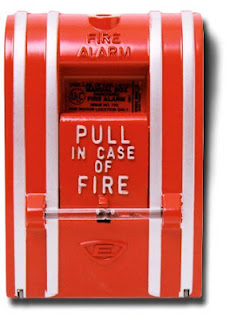 The next thing I knew all the classes started filing out and evacuating the school. I quickly jumped into my class's line like I had never left the room. Outside now my heart was racing! Fire trucks were on the way and the principal was on a megaphone raging about how he would catch the culprit. Overcome with fear and guilt I went and turned myself in. I assumed I was going to get caught and figured revealing myself as the culprit would ease the punishment.

I got to the office preparing for the worst and the principal was actually really nice. I concocted a story of how I "accidentally" hit the alarm and he bought it.  No punishment was given to me but he insisted that I join the school basketball team because of my height. I agreed and next thing I knew my mom was getting me up at 6am to go to basketball practice before school. That practice was one of the most grueling experiences of my life. I was a rock n roller and we don't do 6am for nobody....not even an irate principal. Needless to say I never attended the 2nd practice...
Posted by Kabal at 03:01