Down the left hand path

Throughout the course of this blog I have been mentioning stories and happenings from my past that aren't music related from time to time. My main focus was and is the story of music in my life throughout my life, but when writing my blog entries at night sometimes other repressed memories  get unlocked and I feel it important to capture them at the moment before they are gone. I hope you enjoy these moments as much as I do unlocking them from behind closed doors in my brain.

Dipping back to 1982, I was being chased by an older, angry girl at the school bus stop. There was a park at our stop and I was going full tilt all over the joint trying not to get caught. I ran up to the top of the highest slide and as I reached the peak my foot went in a small hole causing me to trip and fall all the way to the ground below, face down, with my right arm under me bent at a 45degree angle.  I hit the ground hard and slowly got up to my feet, to my amazement I wasn't crying. I was just walking in a circle holding my arm repeatedly saying "fuuuuuuuuuck........shiiiiiiiiiiiit" while all the other kids stood around in a circle of silence staring at me like a sideshow attraction.

I didn't know it at the time but I was in a serious state of shock.....and had a broken arm! Before anyone could say a word the bus pulled up and all the kids ran off. I slowly followed, I was so out of it that I didn't even pick up my lunch bag or school bag OR the record my sister let me bring for show and tell, after a long fought argument with my mom about me bringing it.  As soon as I stepped on the bus the driver, who was normally calloused and bitchy, was now struck with a look of panic and fear. She insisted I sit in the front seat and made a make shift sling out of my jacket. When we arrived at school she quickly rushed me to the office and they called my mom.

The next thing I remember is waking up in a hospital bed with the side guard rails up. They looked so tall that I felt like I was in a giant baby crib and I could not move. All I heard around me was other people moaning in serious pain. I battled to fall back asleep amongst the haunting cries of misery.  It ended up I broke all 3 bones in my arm close to the elbow. I also mangled the nerves so badly that I actually needed surgery, which is generally unheard of for a broken arm. I had a cast for a major chunk of the school year and was forced by my not so pleasant but delightful to look at grade 3 teacher to do everything left handed. I got quite decent at writing and drawing, and ended up somewhat ambidextrous for the years to come. 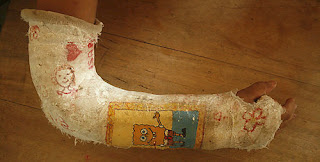 When I finally awoke after the surgery, now in a proper hospital room, the first thing I saw was my mother and father standing at the foot of the bed. They were both clearly upset and sobbing. That was the first time I ever saw my father cry. I couldn't believe that this big, menacing man actually shed tears like I did. I blurted out one sentence which caused me to erupt in tears before I even finished it.....

"Christine is gonna kill me I left her record at the bus stop!!!"
Posted by Kabal at 03:26