As some of you may know and some of you may not, I have an uncanny ability to memorize song lyrics. It's gotten to the point where I can be driving in someone's car with them and I'll start singing a song I'm hearing for my first time by the mid point of the track. The driver would ask "oh...YOU know this song?" to which I always reply "Nah this is my first time hearing it. Not a bad tune."

I own hundred of CDs from a variety of bands. My collection is mainly thrash, hardcore, punk, metal, industrial, rap, hip hop, reggae and classic rock. I practically know almost every lyric to every song on every cd and record and cassette that I own. I often get asked by people "Do you know every word to every song in the world?" That one always makes me laugh, but the answer is obviously no. The other question I get from people is "How did you acquire the ability to do this?" and the answer my friends and loyal readers, definitely stems back to my childhood.

When I first started collecting records at age 5 a lot of them didn't come with printed lyrics so you were left to figure it out yourself. I personally used to listen to a song repeatedly with pen and paper in hand. You couldn't keep jumping the needle back on a record in fear of scratching your tender vinyl, so i would record songs onto cassette tape and use the rewind and pause button as I wrote the song down. I would generally work on one line at a time and there would always be that one word or line that i just couldn't quite make out, so I had no choice but to add lib and decide for myself what the words would be. I used this method for years and after awhile I didn't even need to write the lyrics down anymore. As long as I listened to a song enough times it would be engrained in my brain for life. 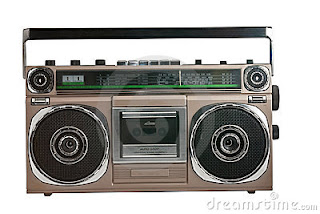 During my highschool days I was into psychedelics and read a lot of books dealing with the human mind. I discovered subliminal learning and realized I could now memorize lyrics in my sleep. I had a small ghetto blaster (radio) that could continuously play a tape, flipping automatically every time a side ended. Learning rock songs was one thing but I was listening to tons of rap in these days and there were TONS of words to be memorized. I would listen to music all night long then hop in the shower to get ready for school, the tape still playing (now loudly) as I sang or rapped along knowing more words than I did the day before.

Being involved with bands for 15 years also helped the cause as I wrote hundreds of songs over the years and can still remember every single word. In the 90's everything started getting rereleased onto compact disc and a lot of those CDs came with lyrics. It was interesting to compare what i knew them as and what they really were, and i had a pretty good track record!

When the Internet finally arrived it became possible to pretty much access the lyrics to ANY song in the history of music. People could now sing "Season ticket on a one way ride" instead of "Sees a nigger on a one way ride" when listening to AC/DC's Highway to Hell.  To sum it up i suppose it is all about repetition to an extent, but I am now on a level where I can learn a modern day pop song's lyrics before the song itself has even finished playing... I reckon I trained my brain throughout the course of my life and I believe this blog is true evidence as I can remember very early memories, a thing most people have a difficult time doing...
Posted by Kabal at 09:09