1984 had a very important key element that changed my life dramatically. A new fad or trend or whatever you wanted to call it at the time had emerged from out of nowhere.....  It was called "breakdancing" and I'm not going to explain what it is as I'm sure you all know of it, if not.... Google it sucker!
Soon a major motion picture simply titled " Breakin' " was released and the seed was planted. 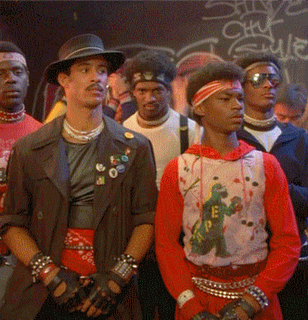 At that time period it was out of this world and the public ate it up, especially the kids. Everyone started dressing different and yes even your humble narrator jumped on board and actually became fashion conscious to follow the heard. I started learning to break dance and actually got pretty good! My dad got me a big cardboard box from somewhere which I flattened out and carefully covered with peel and stick floor tiles we had left over from our new kitchen floor.

The music that accompanied this new art form was essentially electronica and it didn't really do much for me, so even though I looked the part I was still down in my basement breakin' to Iron Maiden and what not. There was one song I loved to break dance to more than any other however, it was by a fellow named Herbie Hancock and the song was called "Rockit".  There was a video for the song and it was really bizarre and somewhat cutting edge for the time period. VCRs had just come out as well so I was now videotaping my favorite music videos and yours truly would rewind that video over and over again so he could keep breakin' to it.

A new girl ended up coming to our school named Michelle that year. Michelle was a year older than everyone because she was back a grade at her previous school....and she had boobs! I charmed my way into her world immediately and was instantly smitten. I now had NO time for my gang or bugging girls or pounding whimps. My recess and lunch breaks were spent lying in the grass of the playground with her holding hands and talking, as we were in seperate classes and never saw each other throughout the day. She was the first girl I had my first "real" kiss with and I eventually got to touch her boobies! (above the shirt) older girls rocked!

Yep it had been a pretty big year.... my first punch in the face, my first puppy love & the heartbreak of being dumped that came with it, my first time "necking" AND my first time touching a girl's breast with actual consent! The whole breakin' movement was also the first time in my life that I actually felt peer pressured to be like all the other kids as opposed to the unique individual that I was and still am today. I didn't want to be the weird kid anymore and my new threads were getting me the ladies! Things may have changed on the outside temporarily, but inside not a damn thing had changed! Or so I assumed, as Breakin' would eventually lead me down a new path where I would discover a new musical realm...
Posted by Kabal at 13:50