During 1984 there were two monumental moments in my life that were delivered via television.

While watching wrestling with my father one day (which I had no interest in) I heard Black Sabbath's "iron man" ring from the boob tube and it immediately caught my attention. The ring announcer suddenly spoke over the music...."from Chicago Illinois with a combined weight of 565 pounds, the AWA tag team champions, Hawk and Animal, the legion of doom, THE ROAD WARRIORS!!!!"

Two huge men emerged from behind the backstage curtain and rushed the ring in a frenzy, quickly pummeling their jobber opponents before the bell even sounded. Hawk and Animal looked like they were straight out of the film "The Road Warrior" and there look was a cross between bikers, punks, and metal heads. I remember seeing them military bench press their foes over their heads and I thought "these guys are stronger than anyone, they'd kill Hulk Hogan!!!"

For the big finish Animal climbed to the top rope while Hawk lifted one of their opponents up in a vertical suplex. Hawk then handed him to Animal who proceeded to power slam him from the top rope for the one two three. I had never seen anything like it and in 2 minutes my life and my perspective on wrestling had changed. I was oficially a wrestling fan!

The 2nd moment occurred when I was watching music videos on television and I came across a song called "The Message" by a group named "Grandmaster Flash & The Furious Five" They were a group of African Americans who somewhat looked metal, as they were adorned in leather vests, pants, hats and studded arm bands. However there was no guitars, no drums, just these guys walking around the mean streets of new York "rapping" over musical similar to what i had heard in the movie Beakin'. 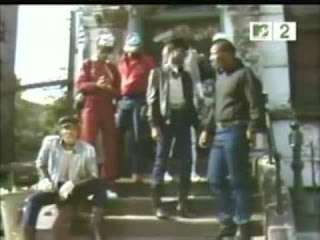 I don't know what it was about the video but I instantly loved it and was thankful my VCR was on record. I now had a new favorite song and video to break dance to in my basement. When I got to school the next day I overheard a few black kids talking about "the message" in my class and I jumped right into the conversation. Apparently  I was the only white kid who had seen the video as everyone else in the class was clueless as to what we were talking about.

To this day the message is still known for being the single most influential song in rap & hip hop history, and I couldn't agree more. It opened me up to a whole new world of music that  I absolutely adored, much to the dismay of my metal head friends...
Posted by Kabal at 07:28