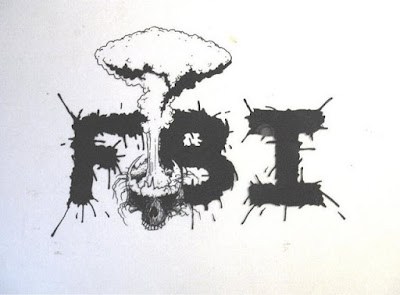 One day while "moshing in the food pit" as we called it (hanging out in the food court) at the Bramalea City Centre, I was chilling with the EBS boys carrying on and having some laughs, when we were approached by a group of guys who knew them. They shot the shit for a few minutes and then they were on their way. I asked the boys who these dudes were and they informed me they were members of yet another Brampton band called F.B.I. which stood for Fucking Brainless Idiots, another acronym which you all know I hold so dearly to my heart.

From what I gathered you had to be a giant to be a member of this band, as they all seemed 7 feet tall to me, except for one of their guitarists Mike who was just shy of 6 feet. These guys were the epitome of the word "Thrasher" as they all adhered to the dress code and boasted some of the longest locks I had seen in my town.

There was another Mike in the band who played the strings, he was a tall, lanky, withdrawn looking fellow who always seemed to have the same blank, expressionless look on his face. I'd always see him sporting his D.R.I. painters cap that I was extremely envious of. For the life of me I could never and still cannot remember which Mike played bass and which Mike played guitar, if I had to guess though taller Mike would be my pick for bassist.

Their drummer Pete a.k.a. "Spidey" was also a tall, lanky fellow with jet black long hair. Despite the fact that he was a really nice guy, he had that look to him like he could possibly be a serial killer, the kind of guy you wouldn't want to piss off or run into in a dark alley, and he wailed away on his drum set with furious intensity & the look of a mad man on a mission.

Then their was "Tex" who I believe was the lead guitarist of the band but don't quote me on that His hair wasn't super long, but he boasted some tight ringlets that made me perceive him as Thrash Metal's answer to Slash from Guns n' Roses. Tex was always sporting a big toothy grin, his pearly whites sparkling like they were made of gold. Tex always seemed happy & lighthearted so I quickly assumed he was the joker of the group.

Last but not least was their vocalist, Tim. Tim was the only member of the group that didn't have long hair, in fact he was quite the opposite, he had no hair! No he wasn't bald, it was shaved by choice. Tim didn't really dress like a skinhead or a thrasher, so I chalked him up as a crossover guy, which in turn brought a crossover element to the band in my eyes and opinion.

A few weeks later I had the privilege of seeing F.B.I. perform for my first and last time, sadly I never caught another show of theirs, but the one show I did see was killer! I stood at the back of the room cooking b.t.s for me and my friends while having my ears and senses assaulted by the thrashing onslaught that was F.B.I. From what I can recall, their style reminded me of the bay area thrash sound I'd grown accustomed to listening to bands like Metallica, Exodus, & Testament. They were heavy as fuck and even though I only saw them that one time, they had a new found fan.

It was a great pleasure to get to know some of the guys over the years, and they were all great dudes who I easily got along with. Thinking back to that night I remember walking home from the party with my friends discussing how fucking heavy F.B.I. were, we had gone to see E.B.S. perform, yet we were blessed with a pleasant, unexpected surprise in F.B.I. another very important and detrimental piece to the puzzle that made up the Brampton scene.
Posted by Kabal at 14:43