Hanging out with Mike and Pooh definitely came with its benefits, like meeting a whole new circle of friends from all walks of life, punks, thrashers, skin heads etc. as well as former EBS members and current ones, like their vocalist Steve Waller.

Steve was a bit on the shorter side and was usually adorned with converse sneakers, camouflage army pants, chinguacousy hockey jacket, staple punk band t-shirt, and bandana. Although I've mentioned Steve before in this blog I am currently referring to the first time I met him, which was in the old food court of the Bramalea City Centre. Steve was a ball of energy, very similar to the way he was while performing on stage with EBS. Like the rest of the surgeons, Steve had a very comical nature to him and it was plain as day to see that he was a good guy.

One day he showed me his homemade tattoos that his friend Bryce did for him. Steve had two tattoos, both of which were images familiar to me that I adored, the Accused's mascot "Martha Splatterhead" and the Santa Cruz Slasher, one of my all time favourite skateboard graphics. With both Mike and Steve sporting tattoos, I was determined to get one sooner than later.

Steve also had a bit of a twisted and sick sense of humour, a pre requisite for being an Epileptic Brain Surgeon it seemed. I truly believe that Steve got a kick out of shocking people and/or making them uncomfortable or grossed out at their own expense so he could have a laugh. Steve also always came out with hilarious and provocative statements, one in particular that I still remember to this day, which was "Did you know if you get a boner while you're taking a shit it means you're gay because you like the feeling of things going in and out of your ass" words of wisdom no doubt to a naive 15 year old dirt ball such as myself.

Steve also shared another common bond with the other surgeons which inspired me the most, being straight edge. For those who've been living under a rock, Straight Edge is defined as someone who doesn't smoke, drink, do drugs, or partake in sexual acts without being in love with someone. Well they all lived up to that except perhaps the sex part. I just loved how these guys were always sober yet they were so high on life. All around me my friends were relying on drugs and alcohol to have a good time, yet here were these straight guys having more fun than everybody! Anytime I hung out with EBS I knew I was in for an interesting day full of laughs and craziness. In fact I was so inspired by this that I myself decided to become straight edge. Unsurprisingly it only lasted a few days since peer pressure is a motherfucker when you're in high school, but I still appreciated and admired my straight edge friends. As far as I was concerned they were the most stable, and strongest willed people that I knew...for the time being... 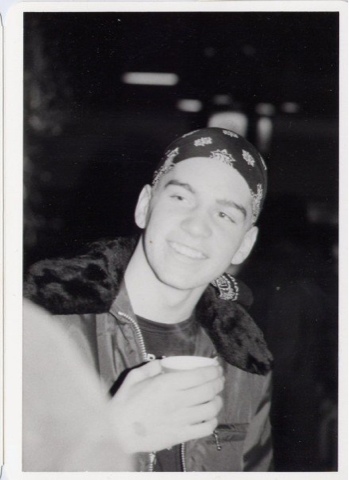