During my numerous visits to Sam the record man in the Bramalea City Centre, there was a certain record I kept seeing that I pondered taking a gamble on, but never did as I feared it might be terrible and a waste of my hard earned money.

Eventually my best buddy Jerry ended up acquiring it on cassette tape somehow so I finally had the chance to give it a listen. The album was entitled "Convicted" by a band named "Cryptic Slaughter"

The album cover boasted some pretty cool artwork that was reminiscent of something I would find in one of my underground alternative comic books I was so fond of. The image depicted four guys, the members of the band, in a jail cell being guarded by a uniformed skeleton. It was safe to assume they were a crossover band seeing as three of the members looked like typical thrashers, and the fourth member, the vocalist of the band, looked more like a punker, with long, black, spiked hair similar to Mr. Jonny Rotten from the Sex Pistols.

Upon my initial listen I really didn't know what to make of it. The guitar sound was a bit tinny, the bass was typical sounding, the singer had a great screeching voice similar to A.M.Q.A. and their drummer was nothing note able, in fact he pretty much played the same beat in every song. Mind you it was a blast beat before the days of grind core, and any drummer will tell you they are not the easiest beats to play. As a whole, the band was not the tightest by any means, but I've always felt a bit of looseness and sloppiness is just another element of this genre of music.

All in all this band really seemed to be lacking skills and technicality, yet for some reason I absolutely loved them! I couldn't quite put my finger on the reason why I loved them but soon enough I was able to sum it up in one word: Heart.

Even the most technical bands can fail if the members aren't a cohesive unit with heart and passion. As talented of musicians as they might be, if the love isn't there it shows through in the music. Although Cryptic Slaughter were lacking in the skill department, they had more heart than you could carry and more passion than you could imagine, which outweighed their being musically challenged. Yet another wonderful and magical element that makes up the definition of hardcore music. 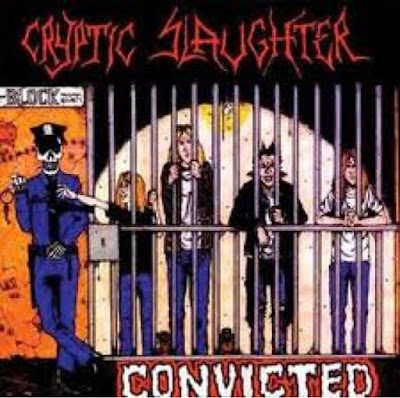