Haunting The Chapel was a fairly decent Slayer album but it was also the only Slayer album I owned so I didn't have much to judge or compare it with, until one specific day.

There was nothing special about this day, I woke up, showered, went to school for the day, went home, had dinner with the family, and then headed to the Bramalea City Centre like any other regular old day.

While putting my hours in as a dedicated mall rat, I was in HMV records, a newer music store that had opened in the mall. As per usual the clerks paid me no attention, as they were used to seeing me in there rummaging through the record bins. HMV now had what I refer to as a "dump bin" full of cassettes. A dump bin is a small display that is usually full of random items that are being sold at a sale price. On this particular day there were two cassette tapes in the dump bin that caught my eye and my attention, "out of the dark...into the light" by "Kreator" and "Reign In Blood" by "Slayer" I swiftly slipped both tapes into my pockets and got the fuck outta dodge.

I was so excited to listen to the tapes that I dipped out of the mall early and headed home. Kreator were pretty cool but the cassette didn't leave that great of an impression on me, the Slayer tape on the other hand blew my mind! The entire album was just shy of 30 minutes in length and this was the first tape I'd ever seen with side a and side b all on one side of the tape. The other side was exactly the same, two sides on one side.

The music was a lot different in comparison to "Chapel" this was a straight out thrashing assault of the senses. The songs were, short, fast and heavy as hell! The song "Necrophobic" became my instant favourite as I had never heard something so fast! Even with the lyrics included in the cassette sleeve it was hard to follow along. The opening track "Angel of Death" was definitely the masterpiece of this release, re telling the story of the Nazi holocaust, and it had that killer riff I was so familiar with from the power hour intro on much music as well as Public Enemy's "She watch channel zero"

The album cover was quite interesting and unlike any cover I had ever seen. It looked like a painting from the renaissance period and it reminded me of something I'd seen in art class during the art history portion, somewhat in the vein of a Hieronymus Bosch painting.

I rarely ever listened to "Chapel" again because in my opinion this release was light years ahead of it and it was the epitome of the true Slayer sound. I never imagined it at the time, but Reign In Blood would live on in history as a timeless classic, and Angel of Death would go down in the books as quite possibly the greatest thrash song ever created! 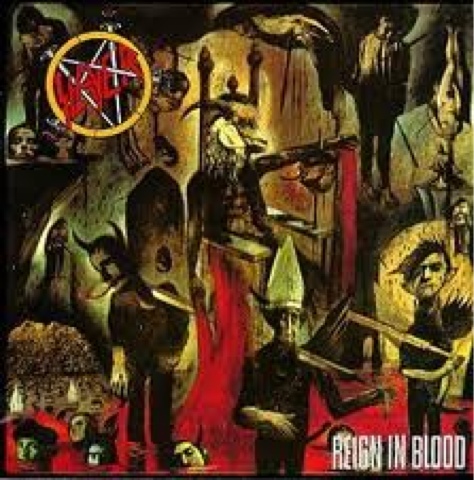