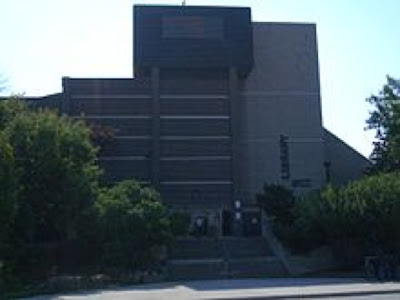 It seemed like grade 10 went by in a flash, and before I knew it the summer break had arrived again. I had really been hitting the skateboard with a vengeance that spring, and the summer was no different. I felt as if I had reached the peak as far as my skills went. I was learning new stuff, landing lots of tricks, and my Ollies were higher than ever, wether I was stationary or moving.

It seemed like every day of that summer was a carbon copy, as my routine was practically set in stone. Sleep in until 10-11am, throw some music on, run a cold, wet, washcloth over my shaven head and face, apply deodorant, brush my teeth, put on clean socks, underwear & shirt, and my dirty camouflage shorts that I'm pretty sure never saw a washing machine once the entire summer. From there I would lace up my converse, grab my skate, and be out the door before noon.

I'd coast down my driveway, hang a left onto my street, then make a quick right turn down the catwalk, which was fairly steep and increased my speed in a heartbeat. The catwalk led to the intersection at Howden & Dixie, so I'd have to pay attention to which light was green, as I had no chance of stopping my momentum. I preferred crossing Howden at the lights so I could bust a monster Ollie over the median.
From there I would coast and carve down Howden boulevard until I hit Central Park drive, from there I would cruise on over to my all time favourite skate spot, the Chinguacousy Library.

I loved it there, the ice rink was gone in the summer and the concrete under it was as smooth as a babies bum, and for some reason I could Ollie the highest in that area. There were also these large stone bricks around the ice rink, they were about 3 feet long by two feet high and two feet wide, and they were just marvellous for busting an assortment of tricks off of, or on to. There were also pick nick tables there as well as planters, and those could be used to your advantage as well, not to mention HUGE sets of stairs with handrails (honourable mentions & props to Steve Waller for being the only person I witnessed with the balls to attempt above mentioned sets) The spot was always full of kids, and once it got too saturated with skaters I would head over to the Peel buildings, and from there I'd goto Ching Park, where I'd usually stay until it was time to go home for supper.

After dinner I'd usually head back out skating or I'd see if there were any parties taking place that evening. This would be the blueprint for my entire summer essentially, until one morning when I got to Ching Library to discover something very disturbing...
Posted by Kabal at 13:34

Email ThisBlogThis!Share to TwitterShare to FacebookShare to Pinterest
Labels: Chinguacousy