Skateboarding is not a crime 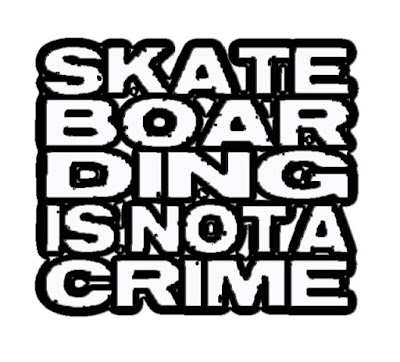 The library had posted "No skateboarding" signs up and I couldn't believe my eyes! I had been skating here religiously all summer and spending my not so hard earned money at their snack bar everyday. The nerve of them I thought. Never one to be bested I decided to disregard the signs and skate there anyhow. All the regulars showed up and they decided to do the same. On any given day it wouldn't be uncommon to see guys like Steve Waller, Glen AKA Satan, Team Scam members Sheldon, Jay, & Navie, not too mention an assortment of other thrashers, some of whom I'm proud to say went on to be professionals and household names.

Nobody was taking the "no skateboarding" sign seriously, not until security guards showed up to chase us off, which became a daily ritual. In fact it was more so a game now, see how long you could get away with skating before security chased you off.

As we hit up other favourite skate spots of ours around town we were noticing a frightening trend, more and more of these signs were popping up around town, with Brampton City Hall being one of the first to jump on board this new holy crusade, which totally sucked balls as it was a nice spot to shred.

One thing was certain, Ching Park still embraced us skateboarders, so that became the new hot spot, which was quickly getting saturated with more skaters each day. Now it had gotten to the point where we couldn't even skate the bowl in peace. Instead we opted to check out other areas of the park, mainly the tennis courts and the curling club parking lot.

One day while skating with this kid Ben, who was infamous for busting huge airs out of the bowl over picnic tables and garbage cans, we were approached by some friends of his who said they knew where there was a half pipe close by. I had never skated ramp so naturally I was pumped up to give it a shot. The ramp was just across the street in someone's backyard. The owner of the house wasn't even present, yet there were about a dozen dudes shredding shit up. When I finally got my chance to drop in I took it eagerly, but as I dropped in my back foot slipped off the board, resulting in my other foot blasting down the ramp on my board, causing me to do the splits down the half pipe, which in turn took all the skin off my right knee.
It was an awfully painful experience, and enough to solidify my decision not to try it again. I was a good street skater so I decided to strictly stick to the streets, which unlike public places couldn't be desecrated by signs prohibiting skateboarding... 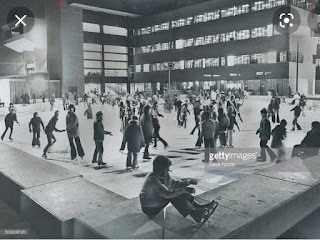 (Ching library ice rink my favorite place to skateboard spring to fall)
Posted by Kabal at 12:34