Tales From The Siboney 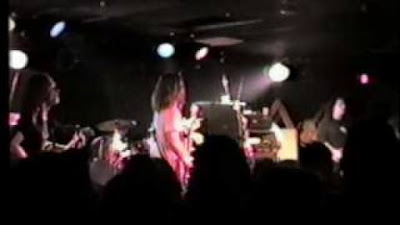 After learning where the Siboney Club was via the Day-Glo Abortions concert, and already knowing how to navigate my way around the city via the Go Bus and TTC, I managed to take in a few more stellar shows during the year of 1989, and it seemed all of the thrash and hardcore shows were held at the Siboney, which to me was the greatest venue of all time. For the time being as far as this story goes.

The first show I went to after Day-Glo was New York speed freaks Nuclear Assault. None of my friends had money to go, and the ones that did have the money to go didn't have the permission from their parents to go. I had seen the video "Brainwashed" which was enough to sell me on buying Nuclear Assault's latest release "Survive" from the Record Peddler much prior to this, so I was going into the show familiar with the music.

Their bass player was none other than former Anthrax bassist and S.O.D. bassist Dan Lilker, and he was the first person I remember seeing when I stepped in the club, mainly because he's almost 7 feet tall and his head was practically touching the ceiling when he stepped on stage briefly to drop his gear off. I dipped into the can to take a quick piss and to my surprise there was Dan! I felt like I was in the presence of a thrash god, but I kept my mouth shut instead of playing the annoying fan boy.

I don't even remember who the opening acts were, and it didn't even matter as I was there to see the Assault, and they ripped the crowd a new one with a solid performance. Their singer John's voice sounded just as screechy and intense live as it did on record. I thrashed in the pit solo for the entire set, and the energy and vibe in the room was just incredible. I'll never forget on the bus home that night I fell asleep and missed my stop at Bramalea City Centre. When the driver awoke me I was at the end of the line at the Go Station downtown Brampton, a good hour walk from home. Craig the guitarist from my band had given me $20 to buy him a shirt which I never got due to prices being higher than the funds he had given me, and I ended up having to spend the money to take a taxi home as to not miss curfew and avoid an ass whooping.

Another band I was fortunate enough to catch at the Siboney in 89' was none other than Sacred Reich, who had just released their "Surf Nicaragua" EP in late 88'. The Reich hailed from Arizona and they were all big stocky dudes who just ripped shit up with impeccable speed and tightness. I actually went to this gig with Pooh & Mike from E.B.S. and if memory serves correct there was an unknown 4th person with us, perhaps the estranged part time EBS bassist Paul Lutz...or maybe it was Waller...anyhow...When we were walking from the Ossington subway station to the club, we noticed Jonny, the singer of Sudden Impact, was walking there as well just a few paces ahead of us. Here I was star struck while the EBS boys were cracking one liners out loud about him! Awkward!

The Siboney was ram packed that night as per usual and the action in the pit was a bit frantic. A lot of the crowd were straight up metal heads who didn't quite understand the concept of moshing, they were more so just running around the circle pushing, punching & kicking people.Half way through the set we all had clearly gotten fed up with that shit, so we stood just outside the circle and watched Sacred Reich tear the house down. Unbeknownst to me, Mike was actually observing the pit to see who the dickheads were fucking every bodies fun up. Mike tapped me on the shoulder and shouted in my ear above the blaring music "WATCH THIS!" The next thing I knew he shoved one of the perpetrators as he was passing us in the circle and the dude went careening inwards on his ass, while everyone in the pit inadvertently trampled him.

When the dude finally collected his marbles he came and stood on the sidelines near us, then he started glaring at each of us one at a time trying to figure out who had pushed him. Needless to say we were all having a hard time keeping straight faces. When the guy finally decided to rejoin the action Mike did it again, only this time the guy came at us enraged. A few words were exchanged and that was the end of it, but my adrenalin was absolutely through the roof now. With a mosh pit right in front of me the outlet for it was obvious. I thrashed on until the night was gone, then headed home pondering what act I might catch next at my beloved Siboney Club...