Today I am slightly backtracking in the story once again to mention a very important happening I overlooked writing about, the Epileptic Brain Surgeons going into the studio to record their first real demo tape, I was fortunate enough to be the kid who was in the right place at the right time. The boys in E.B.S. knew I had recently acquired a brand new drum set, and since McCuish's was a tad bit on the beaten and battered side, they asked me very kindly if they could use my drum set for the recording session, being their number one fan I instantly said yes to the idea. I loved E.B.S. and I wanted their recording to sound the best it possibly could.

My only request to the guys was that I would be allowed to be present in the studio to witness the whole recording process. Musicplex, which was down the street from my house, now had a recording studio in the back of the store known as "Studio A" and that's where all the magic would take place. I met the guys there with my drum kit and we hauled all of the gear inside where we met the would-be producer for the project Archie Hachey, he was an older man who didn't look like the type to listen to hardcore, but none the less he was friendly, easy to work with, and mon judgemental despite the genre of music. In fact by the end of it he may of been a new fan!

For myself being a 16 year old punk and getting to see how the inside of a professional recording studio operated, I was in bliss. This was a dream come true for me. I felt like a big part of something I was merely spectating, mind you without my drum set the recording may have been an absolute bust. Then the guys asked me to step in the booth with them to do some back up vocals, I was now REALLY apart of this and not just a spectator with a loaner drum kit. I was honoured to be shouting "take a bath" into the mic during "soap" from what I remember we all did gang backup vocals in "Screaming' Boogies" as well.

Ultimately it was just really cool to be there and see what recording was all about. I never knew about individual tracking, punching in, or any other tricks of the trade. By the end of the weekend I found it incredible and fascinating to see the project come together full circle. Now all we had to do was sit back patiently and wait for the finished product.

I'll never forget that day either, I went to see Pooh while he was working at Sears so I could get my complimentary copy of the demo, my payment for letting them use my drums. I was a bit taken back by the cover and title of the demo, but he explained how they couldn't come up with anything, so in a last minute ditch effort the boys collaborated and cut random things out of magazines and made a collage of an image, even the demo title was done in this same fashion, "Hells big apple bites back upon family brunch" Geniuses, I thought in my mind. As I opened the tape and started skimming through the special thanks in the liner notes, I just about shit 10 bricks when I saw MY name in there in all it's glory "Kevin T" Even though my last name was abbreviated to a simple initial I still couldn't get over the fact that I had made liner notes on a real tape! At age 16 that was a pretty big fucking deal! 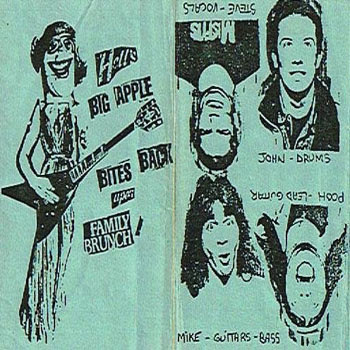 Over the years whenever the tape was mentioned, it has always been a pleasure for me to tell the tale of my involvement. I don't think the guys in the band really knew how honoured and privileged I felt at the time. It's been amazing telling friends I made years after the fact "Yeah they used my drums on that!" I never looked at it like if it wasn't for me the demo would have been a failure, because that wouldn't be true, they would have got it done by hook or crook one way or the other. It has always just been a great feeling knowing I helped some friends out in a time of need, and that a little piece of me is immortalized in what possibly might be one of the most important releases to ever come out of our hometown of Brampton, and to me that is a true thing of beauty...