A few weeks into grade nine there was another extremely significant event that took place, my parents had sold our old house on longbourne crescent and we moved into a brand new house on lord simcoe drive. I was now a bit closer to the high school but lost the privilege of  walking to school with my old friends. I started walking with a new group of friends who lived in my area.

While walking to school one morning with my group of new friends, one of them mentioned he was selling a drum set. I immediately inquired as to how much he wanted for the kit and he was only asking for a mere $100....or was it $200? I honestly can't remember. I asked him if the kit was in decent shape and he told me it was practically brand new. I then asked why he was asking for such a low amount of money if the kit was basically brand new.

As it turned out, he had rented the drum set from a local music store using a stolen credit card he had found somewhere, the plan worked and he got away with it, however he was very paranoid about the whole situation and just wanted this drum set gone from his life to avoid further stress. I told him I'd gladly buy the drum set since I still had quite a bit of money in the bank from my summer job at Bell Canada.

If my memory serves correct, that evening my friend packed the drum set in his fathers van and they personally delivered it to me. They helped load it into the house, I payed them the cash for it, and I was now the proud owner of a new, stolen drum kit. The set was a five piece black pearl kit which included a snare drum, two roll toms, a floor tom, and a kick drum. Also included was a hi hat, crash cymbal, and a ride cymbal. 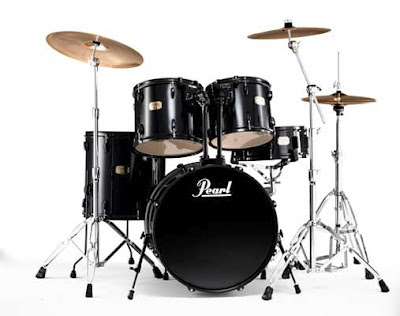 The basement in our new house was unfinished so my folks agreed that I could set the drums up down there. I was absolutely ecstatic, not only did I have my own drum set, I also had a practice space to play them in. I decorated the wall behind my drums with a new Anthrax flag I had bought as well as some other posters and pictures. I hadn't played drums in a good year or two but that didn't matter as I didn't miss a beat. I found myself trying out new beats, most if which were inspired by the new genre of thrash music I had discovered. All I did was hang out in my basement and bash the skins whenever I could get the chance.

I immediately informed my good friends and band mates Jerry and Craig that I had bought a drum set. Gone were the days of jamming in Craig's room with my drum machine, we had the real deal now AND a real rehearsal space. It was clearly time for us to bring our band to the next level...
Posted by Kabal at 06:48