One day at school during grade nine I was telling my buddy Ryan about our band "Anathema" which he was quite interested to hear about, so much in fact that he asked if he could come watch us at our next rehearsal. I agreed and told him he could even get in on the action if he wanted.

Our next jam session arrived and Ryan showed up at my place to watch. We went through the handful of songs we had as he sat and eagerly watched on. After we played through the set a few times I asked him if he'd like to hop on the drums and try our songs out with us. The fact was that I found it very difficult to sing and play drums at the same time. I could pull it off but it was hard and the timing on my vocal delivery was altered due to me following the rhythm of the drums.

Ryan picked up easily on our songs and was jamming right along in unison with us and his timing was impeccable. The truth of the matter was he played drums much better than I did, he had much more experience than me and he was much more technical. Plus he was the guy who taught me to play drums in the first place. On the flip side of things I was really enjoying just being on the microphone. There was no drum set binding me down and I was able to deliver my vocals the way they were intended to be delivered in the first place. All in all our songs were sounding much better with the addition of Ryan on drums, and me being able to do my thing on the mic. 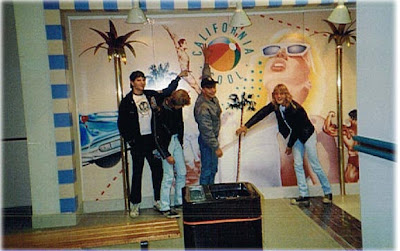 To be quite honest I had become somewhat enamoured with the high energy vocalists I was seeing in all the new crossover bands I'd recently discovered, and I wanted the freedom to jump and mosh around and deliver more showmanship. By the end of the jam the original 3 of us had a pow wow while we smoked cigarettes in the cold cellar of my basement. We all came to an agreement and decided to ask Ryan if he wanted to join our band as the new drummer, he agreed and even stated that we could jam at his parents house and combine my drum kit with his to make one giant, thrashing set!

Everything was coming together nicely but there was now one key element we were missing if we were going to become a true crossover thrash band...a bass player...