A few weeks after purchasing Anthrax's "Among the living" cassette, I found myself back at the dentist for some follow up work. My first visit weeks prior was part one of two visits that I had to make to the dentist. If memory serves correct the follow up appointment was to fill some cavities that the dentist discovered during round one. As per usual my mother had agreed to buy me a new record afterwards.

I now found myself once again standing in Sam the record man. Surprisingly this time around I didn't even look through the vinyl records, I went straight to the cassettes and picked up Suicidal Tendencies "Join The Army" I flipped the tape over to see if it contained the song for the video I had recently seen "Possessed To Skate" and much to my relief it did. That one song was enough to sell me on buying the tape.

Once I got home I did my usual routine which consisted of retreating to my bedroom, popping the tape in my stereo, and strapping on the "ear goggles" (headphones) As always I listened to the tape from start to finish a few times repeatedly, while following along to the lyrics, reading the liner notes, and admiring the cover artwork, which in this case was a gnarly looking dude wearing a blue bandana. He was holding a pistol in one hand and was pointing forward with his other hand, very familiar to the iconic image of Uncle Sam wanting you to join his American army. 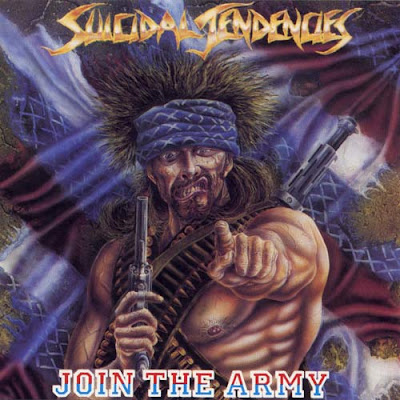 Another aspect of the tape that caught my attention and intrigued me was the inner sleeve of the cassette cover, which was a mass photo collage of the band. I had never seen a collage like this in any release before and I could easily get lost in trying to look at each and every tiny photo that made up the collage.

Musically this tape was fantastic. Suicidal seemed to have their own distinct guitar sound which was provided by Rocky George, an African American. I remember being fascinated by the fact that a black man was playing guitar in a thrash band, and he was an incredible guitar player with licks that made the average metal guitarist seem elementary. The singer also had a very distinct voice that almost sounded like he was straining to deliver his vocals in somewhat of a raspy manner. The majority of the songs were a blend of fast paced action and rocking grooves and breakdowns.

All in all I was overly impressed with this tape and I felt every track on it was quite solid. The stand out song for me however was the title track "Join The Army" it was very grooving and almost had a rap type appeal to it due to Mike Muir's vocal delivery. I was enamoured with the new crossover of rap and metal that Anthrax had introduced me to, and this was right up there in somewhat the same sort of vein. Before long I found myself wearing flannel shirts a lot with just the top button done up as well as bandanas and/or baseball hats with the bill flipped up and "Suicidal" written inside of the bill with black magic marker. I was now emulating the Suicidal look and it had nothing to do with trying to be a crip or blood or some type of gangster. I had simply joined the army...