I remember before my family moved off of Longbourne crescent and onto Lord Simcoe street, Jerry's family had moved onto Longbourne, house number 69 at that! I spent quite a lot of time there due to the fact Jerry was now a mere minute walk down the street from me. Jerry's folks were from Newfoundland and they were pretty cool and laid back, they even let us smoke cigarettes in their house when we were 13/14 years old. Most of my time spent there was occupied by either playing Karate Kid and Castlevanyia on the Nintendo gaming system, or watching horror movies that we had rented from Jumbo video across the street. It wasn't uncommon for us to rent 3-5 scary movies at a time and watch them all.

I recently unlocked another new memory while thinking about those days spent in Jerry's basement. Before my family moved, before I got my drum set, and before Anathema became a real band, there was another band name we had started off with, the name was "Madballs" inspired by these gnarly toys I was collecting, there was even a comic book. Anyone who knows me clearly knows of my toy obsession as I have been collecting for years. In my early teen days I was always scouring places like the It store and Hallmark for bizarre and strange collectibles. 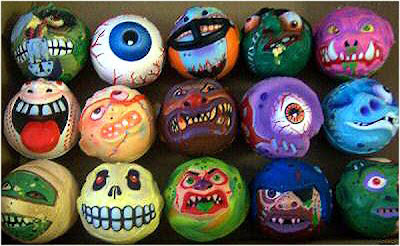 Jerry had a school project that he asked me to help him out with. He had to design a record cover for music class. Jer did not have much artistic ability but he was great with industrial arts like wood, welding, and auto. I loved drawing and the fact that I got to design a record cover was all the incentive I needed. The school had supplied him with some white bristle board that we measured, cut, stapled and taped together to create a record cover that actually was like a legit sleeve, you could even fit a vinyl record inside of it. We agreed on a Madballs design so now we had our own record cover even though we weren't even a real band yet nor did we have more than two or three songs at the time.

The artwork looked great and Jerry ended up passing the project with very high marks. A year or so later I went onto discover a new hardcore band from the New York area named "Madball" hence why we never stuck with that name and ended up changing it to Anathema. Their singer was a kid our age and he was the younger brother of Roger Miret, lead singer from Agnostic Front.

When I got home from Jerry's that night, I entered the house and closed the front door, which in turn woke up my Papa (grandfather) who was asleep in a rocker. My nana and papa (moms parents) were over visiting and it wasn't uncommon for him to take a nap in his favourite plush rocking chair. On this particular night however, me closing the door caused him to wake up, which was a good thing as he realized he was having a heart attack in his sleep. We called 911 and off to the hospital he went. A few months later he ended up passing away peacefully in his sleep. I still wonder to this day if I hadn't come home and inadvertently woke him up would he have died right there in our living room? I felt like I had saved his life, even if it only was for a few more months...