We Hate The Snow

Even though I had known Craig since kindergarten, Jerry and him were forming more of a best friend bond, perhaps because I had quit smoking and they were still smokers. I could find them on the roof of the french school down the street from me puffing on cigs most evenings. Why the roof? So their parents wouldn't find them and bust them for smoking! Duh!

Jerry had caught wind of the jam session Craig and I had recently experimented with and he was curious to see what we were up to. I can't recall if he had his guitar yet, or if he used one of Craig's, or if he just sat in and spectated on the jam, but he was there regardless and he was instrumental in co writing our very first song with us "We hate the snow" 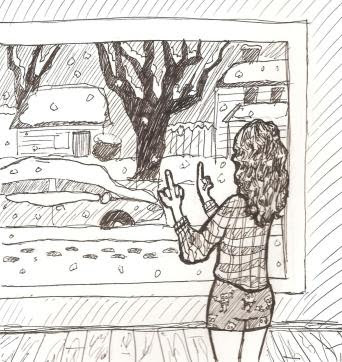 The song was spawned from us walking everywhere and having to deal with the cold, Canadian elements. The lyrics were a collaboration between the 3 of us and went something like this:

There were more verses but that is all I can remember. Looking back at this I still find it hilarious as when we first wrote it, and amazingly we wrote the song in somewhat of a speed metal/ thrash/ hardcore vain. The verses were sang over a faster, chugging riff and the chorus over a slow, crushing breakdown, each word accenting the music. We even wrote a second song "We hate the rain" which was essentially the exact same song but with the lyrics altered to describe walking in the rain instead of the snow.

The three of us had actually made these songs up when we were walking in the snow or the rain, and now here we were in Craig's bedroom putting music to our words. It felt good, it felt real, and it felt like we actually had the potential to become a real band...
Posted by Kabal at 07:39