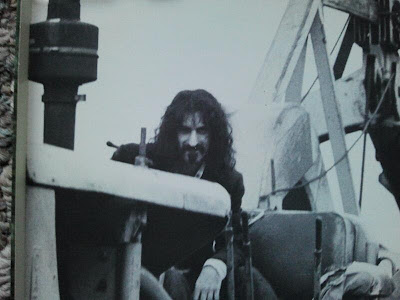 Another one of my musical influences in life I've totally neglected to mention over the course of this story, is my father's brother, George.

My uncle George had a very uncanny resemblance to none other than Jesus Christ, back in the late 70's and early 80's. George was a free-wheeling bachelor type who seemed to enjoy the finer things in life, such as women, great music, and the occasional "party favours". George lived with my grandparents, although he never seemed to be there very often. Every summer I'd go and spend a week at my grand folks and I wouldn't even see him. As much as I loved my uncle, I appreciated the fact that he wasn't there, since he had a tv and VCR in his room, which enabled me to watch something other than the news or the Greek Orthodox programming my grandparents watched.

In the early 80's there was a "Just Drums" store that opened on Yonge street close to my grandparents place, and my Uncle, the music lover, decided to buy a drum set. He also built a soundproof room in the basement of the house right beside where my "Bobba" (grandma) did her laundry. Needless to say, my summer visits now consisted of me slamming away on the skins. George had a huge rack on the wall he built to house his endless collection of cassette tapes. There was also a stereo in the room as well as headphones, so you could play along to music if you so desired.

One day I went down to play some drums and I decided I'd throw a tape on to play along with. As I scanned through the tapes, none of the band names rang any bells. My uncle was a huge fan of some guy named "Frank Zappa" who I knew absolutely nothing about. Judging by his looks I just assumed he was another Jim Croce. George had tons of Zappa material, but I was looking for something I actually knew. As I scanned through what seemed like hundreds of tapes, there was a band name that caught my eye... Angelic Upstairs. I had never heard them, but I was positive I had seen their vinyl in the punk bins of my local record store. I decided I'd throw that on to jam along with.

This wasn't the type of punk I was familiar with, in fact it didn't really seem punk at all, but I was just happy to be on the drums! Every summer break I was always excited about going to my grandparents. Looking back, I feel bad, as I was more excited to play drums for a week as opposed to visiting my family, although I still spent time with them and went out on the odd excursion with them.

Although my Uncle had completely different musical taste from me at the time, he was still a huge musical influence in my life and also the inspiration behind me learning to play drums. I also feel he was instrumental in me becoming a musician, had it not been for him, I may never have played in any bands or spread any joy through music. There is no gratitude great enough that I could give him for that other than my love and appreciation. Thank you Uncle George, like so many others in my life, I would have been nothing without you...
Posted by Kabal at 12:54