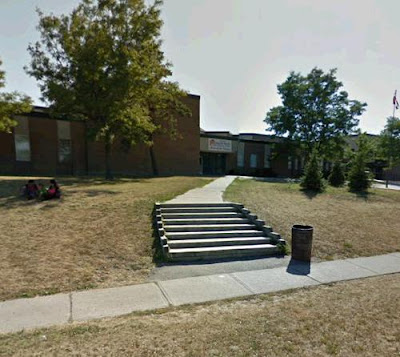 The school year was coming to an end and I couldn't have been happier. When we weren't playing soccer, we were partaking in our new past time....rapping! I'm not sure if it was the music or the marijuana, but my friends were becoming open minded to rap music now, in particular the boys from E.B.S.

Now on lunch hour, you could find me at the front of the school smoking down by the sidewalk with Mike Myre and Danny Henry. Danny was an interesting cat. "Disco Dan" was black, yet he claimed to be Scottish, and he was always dressed in Ranger gear. Some people may of though he was a poseur or wannabe, but the fact that he was a black guy that knew every lyric to the Beastie Boys album "Paul's Boutique" made him aces in my book.

We would literally sit in front of the school and rap the entire album acapella. I would do Adrock's lines, Danny would do Mike D's lines, and Myre would do MCA's lines. It was actually quite impressive the way we would back each other up and trade off lines, and if someone got stuck on a line the other guys were there to save the day. Our chemistry was great and we played off of each other so well, like we were an actual cohesive rap unit.

Shortly after Mike Chapman was recruited as the bass player for E.B.S., he started hanging out with us on lunch during our rap sessions. I guess he got tired of being a spectator, so he asked me one day if I'd make him a dub of Paul's Boutique, to which I obliged.
Before long Mike knew all the lyrics, which worked out well as Danny had either dropped out or was expelled, I can't quite remember now.

Regardless we now had Mike C doing the parts of Mike D, and we were three white boys spending our free time reciting the rhymes of three other white boys. I didn't know it then, but this would be the pre cursor to our very first rap band...
Posted by Kabal at 05:14