Connie was a French high school student who lived in what at the time we considered the far outskirts of Brampton, the area of Sandalwood and highway 10. She went to catholic school just like my former girlfriend Lydia. I don't know what it was with me and catholic school girls but oh how I adored them so.

We started out talking on the phone, I of course took advantage of the fact she gave me her number, and we would chat for hours and hours. I'd tell her about all my favourite bands and it wasn't uncommon for me to play her songs over the phone via my little boom box. We even had our own song, "In My Eyes" by none other than Minor Threat.

Although she was uniformed, it was clear as crystal that this girl was a freak, or a punk, or whatever she classified herself as. Her fire engine red hair was usually crimped and styled unlike no other girls hairdoo I had ever seen.

As natural of a beauty as she was, Connie wore fairly heavy amounts of make up, not to cover any flaws as in my eyes she was flawless. Her heavy and stylized eyeliner jobs were merely an extension of her personality.

After weeks of talking we started meeting on a regular basis. She would take the bus to the mall from her school, and I would walk to the mall as I always did. We would walk around holding hands, we would shop, we would eat in the food court and chat, and of course she would have to accompany me to my favourite spot in the entire mall, The Hex Arcade.

Every time we went out she always had one request, that I wear my bandana and hair in front of my face like the day I met her. I had no problem with it but after awhile I started wondering if she actually liked me or just my freaky styley. We would head back to my place afterwards and make out in my room until it was time for her dad to come pick her up.

Connie brought me and a few of my boys to a party once with all of her French friends. As much as I liked her, for the life of me I couldn't figure out why she hung around with all of these boring, uptight people, as this was easily the worst party I had ever been to. I decided to bust out the infamous chain trick to spice things up and it did not go over well at all. Every guy was intimidated, every girl was screaming in horror, and I think one of them even puked.

Eventually she ended up breaking it off with me for reasons I can't quite remember, but I do remember I was quite devastated, as I had developed intense feelings for her. I was scorned, heart broken, and that led to hate and rage. I now despised this person I cared so dearly for.

I never saw, nor heard from her again, until about a year later when I saw her in the mall. To my amazement and disbelief she was pushing a stroller around with her new born child in it, at her side her new pint sized boyfriend. I remember thinking to myself "Sucker" for my life was just beginning, and the way I saw things their lives were ending... 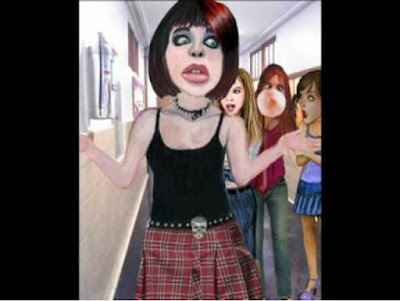