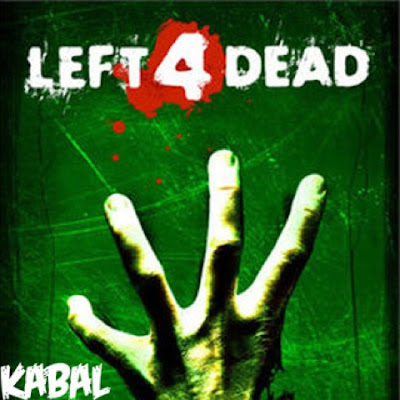 Greetings to all my loyal readers, today I am taking a break yet again from the story at hand, so I can indulge in some shameless self promotion.

I have recently began working on my newest recording effort over the past few months entitled "What's Below Remains Below" and I am both thrilled and pleased to be officially finished my second song, "Left 4 Dead" which is based on the Xbox 360 video game of the same name.

I started playing Left 4 Dead back in 2008, not long after finally buying an Xbox, I bought the game based on a recommendation from a friend and co-worker, and I was instantly hooked. For those of you unfamiliar with the game, Left 4 Dead is a first person shooter set during a viral outbreak that has turned the majority of mankind into zombie-like, blood thirsty maniacs. After killing countless hordes the next thing I knew it was the fall of 2009 and "Left 4 Dead 2" was being released. Needless to say I was uber ecstatic!

I picked the game up the day it came out and also finally got an Xbox gold account so I could play online. The game offered a "versus mode" which pits two teams of four against each other, and you actually get to play as "special infected" superiorly mutated beings each with their own unique attack.

After learning all the levels inside out I started playing online and was immediately addicted. I love nothing more than playing as the special infected, so much in fact that almost 3 years passed by and I was still playing the game religiously. I even ended up having to buy a second copy of it after my first one got played out and mysteriously cracked in half while I was in the midst of playing.

About a year ago I met some people playing online and we became friends. I play with these friends on a daily basis almost, and even though I have never met any of them, they have become the newest addition to my family. We have fun most of the time (except when playing against "try hards") and they've also been there as friends I can blow steam off around and talk about my problems with. In some way they are the main inspiration behind this song and I'd like to thank a great bunch of guys (& gals) for being the people they are, I'm glad to have you all enter my life and I dedicate this song to you, enjoy!