Now that I was in with my new group of friends I was constantly meeting new people through their circle of friends, some of whom were already graduated and apart of the working world. One of the guys named Jay who we referred to as "Dove" had cool enough parents that they would let us party at their place every weekend and they didn't seem to mind all the underage drinking that was going on. We would have the brews a cracking, the tunes a cranking, and usually super Mario or Ice hockey booted up on the Nintendo.

It was at Jay's that I got acquainted with yet another Mike, Mike Chapman. I had seen Mike around school in grade 9, he was a member of a band called "The Stiffs" who's flyers adorned the high school walls. Mike was what some may call a "goth" or "industrial" he wore all black, a long black trench coat, and he had an extreme flat top hair cut, almost like a cameo, which appeared to make him look 7 feet tall.

I always found him to be somewhat of a big, intimidating guy, until we struck up a conversation at Dove's place one night. Mike ended up being a super nice guy and he was very easy to talk to. Mike didn't seem to mind nor judge me on the fact I was a few years younger than him. As we shot the shit Mike revealed the fact that he worked for the city of Brampton, mainly on the grounds of Chinguacousy park where I frequently skateboarded.

From that point on whenever I was at Ching Park skating I always made a point to keep my eyes open for Mike. I'd usually run into him driving one of the city vehicles around the park. Mike would always stop to talk with me and he never seemed rushed or pressed for time. I truly appreciated the fact he was a genuinely good person who always had light hearted words and humorous statements in store for me.

That went for while we were at school as well, Mike would always say hi when we passed each other in the halls and normally he would stop to talk for a few minutes. Right from the get go of meeting Mike I always felt there was something special and unique about him and I also felt more connected to him than any of the other older dudes I was now hanging out with. I didn't know it at the time but Mike and I would go on to be great friends, roommates, and band mates as the years progressed... 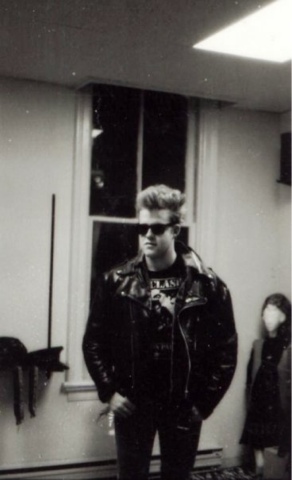