Once everything was wrapped up as far as dealing with the parks & rec crew went, we humbly packed up our "snowboards" and headed home in the bitter winter cold. Everyone seemed pretty down about the fact that we couldn't build jumps on the ski hill anymore. We could however still ride our decks down the hill but with no sweet jumps to hit along the way it just wasn't the same. I was going to share the news with the guys about the name I had discovered in the office, but all of our band mates weren't present so I decided to hold off.

The next day after school was a Friday and the time had finally come to move all our gear to Ryan's house. I don't remember exactly how we got the stuff there since none of us were old enough to drive yet, so I'm assuming our parents helped us out. In Ryan's basement there was a small room off to the side that contained a bed and some bookshelves, this would be our new rehearsal space. We combined the two drum sets into one and we now had the power of double bass drums, a staple in the world of thrash and hardcore. I had previously taught myself to emulate double bass on one kick drum, now trying it out with two seemed very awkward to me, but Ryan got the hang of it in no time. We placed the amps where we wanted them and we were good to go. 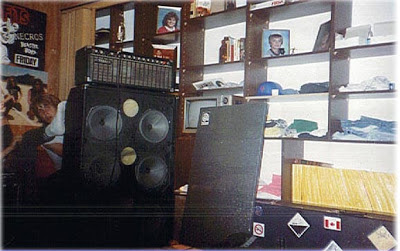 Saturdays were now our official jam day, so the following morning we collected at Ryan's place just before noon. Having the bed in the room was a great stress reliever, we could now have wrestling matches if the tension between us got to high, or if we just wanted to have some fun. Before our first official jam at Ryan's kicked off I brought up the band name I had in mind, G.P.K. or Garbage Pail Kids. Everyone instantly agreed upon it. The name still was a bit juvenile to say the least but it was a perfect reflection of us. We were all kids still, well teenagers, and we were all fairly unkept in our appearances. None the less it was settled and we would now be known as G.P.K.

Inspired by our new name and an artist named Sean Taggart, I was eager to draw up a cartoon picture of our band. Taggert had done some amazing artwork for The Crumbsuckers "Life of Dreams" album as well as Agnostic Front's "Cause For Alarm" album. Sean's style was cartoonish yet exaggerated with a bit of a new wave comic twist to it. As the boys made some sweet noise with their instruments, I sat on the bed working on my drawing. I never did finish it up at jam, so as soon as I got home I was right back to work on it. Essentially I stole some of the faces he had drawn on the Agnostic album and incorporated them into the drawings I was doing of us. There were so many faces on the Agnostic album that I was able to wisely pick ones that reflected or resembled each of us. When I finally finished I was very happy with the final product. 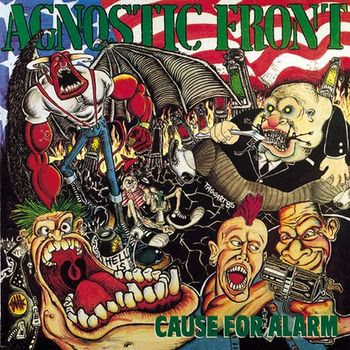 The following Monday I brought it to school with me and made some photocopies. I wasn't much for colour in my younger days so the entire piece of art was all done in black pen, which translated better anyhow for xerox purposes. Initially I believe I had plans to colour the drawing in but I never did get around to it. Regardless I was more than satisfied with what I had created, and the time had come to spread the word of G.P.K. via photocopies of our new band art.

The library in our school was the only place with a xerox machine so there I was pumping out copies while all the scholar types read books, studied, and worked on assignments. As far as I was concerned guerrilla marketing was the way to go, shove things in people's faces and ram it down their throats. Instead of literally doing the above mentioned, we roamed the school stuffing the copies into the breathing holes of everyone's lockers. We were now getting our name out there despite the fact we hadn't even written one song yet as a five piece band, but the way I saw it we were jumping the gun and making people aware that we existed... 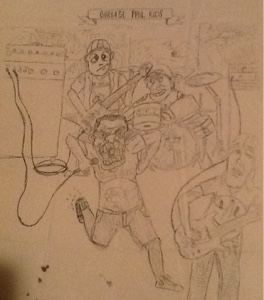