So our band now had two new members and a new name, The Little Thrashcals. As the weeks passed on the name bothered me more each day. At first I found it quite clever but as time passed on I found it to be corny and silly. Eventually I felt it was flat out ridiculous. In my mind I assumed no one would take us serious with such an asinine name. It was time for another change.

As the world of thrash and hardcore unfolded itself to me I noticed yet another trend that I became obsessed with. A lot of these bands had three words for their name that were acronyms simplified into three letters, or initials, however you want to look at it. Some may dispute the fact that the "MC5" is considered the first 3 letter band, i am one of these disputers since 5 is technically a number and not a letter. 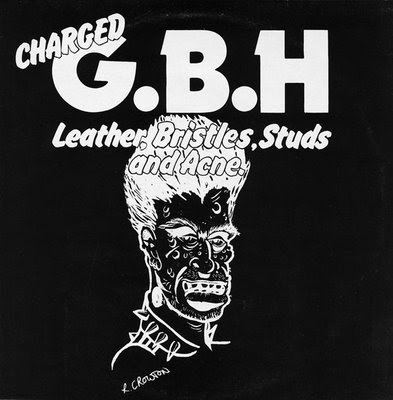 You had bands like G.B.H.(Grievous Bodily Harm) who I believe to be the first band that started it all. Out on the west coast you had skate rockers J.F.A.(Jody Fosters Army) then there were crossover pioneers like S.O.D.(Stormtroopers Of Death) who's front man Billy Milano went on to start his own band M.O.D.(Method Of Destruction)

Out in Texas there was D.R.I.(Dirty Rotten Imbeciles) who were by far the fastest band on the scene. Rumour had it their drummer Felix kept an oxygen tank and breathing mask beside his drum kit so he could pump oxygen into himself between songs. This was later confirmed when they released a home video called "live at the ritz" of a live performance. M.D.C. was another Texas band and I think they intrigued me the most due to the fact that their three letters changed with every new album, ie: Multi Death Corporation, Millions Of Dead Cops, More Dead Cops, Millions of Damn Christians, etc.

Out in North Carolina you had C.O.C.(Corrosion Of Conformity) one of the more technical crossover bands with a lot of cool time signatures and sick breakdowns. Even Toronto had its own 3 letter outfit, M.S.I. (More Stupid Initials) and out on the Canadian west coast there was D.O.A.(Dead Or Alive) other honourable mentions goto A.O.D.(Adrenaline Over Drive) and R.K.L.(Rich Kids on LSD) I'm sure there were a few others but I can't remember anymore at the moment.

So now here we stood as a band looking to change our name to a three letter acronym. The question now was what threw letters would we choose and what would they stand for?
Posted by Kabal at 19:21