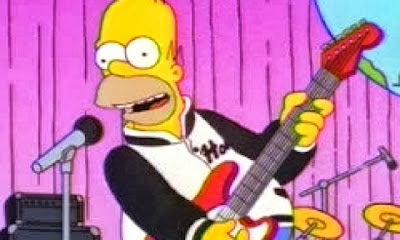 One day at school, myself, Mike and Mike, we're talking about The Simpsons, a comic strip that was now becoming an animated television sitcom. Mike C had been a long time fan of the creator Matt Groening, so needless to say Mike was excited for this show to premiere. So excited in fact that he invited a few of us over to his place to watch it. This would be the first time I ever stepped foot in Mike's home.

Mikey's place had a very warm, homely feel to it. Pictures of the family adorned the walls and end tables, everything was bright, clean, and in place, almost how you'd expect your grandmas living room to be. We passed through the small kitchen towards the basement door, where I met Mike's mom for the first time. She was a very pleasant and friendly lady, I could see where Michael had gotten his amazing demeanour and composure from. As we headed downstairs I felt like I was being time warped back to the seventies. The basement was all wood panelling with some funky bright shag carpet, and the furniture appeared almost vintage or antique. We settled into the oversized couch and prepared to watch the premiere of The Simpsons.

The show itself was good, but not really memorable. I recall thinking to myself it was cool having an animated show on tv now, especially being a fan of cartoons and drawing my whole life. What really commanded my attention that evening however, was a small, glittery, jazz drum set Mike had in the corner of his basement. I asked him if he'd mind if I played them, to which he gave me the ok. As I started dropping funky beats Mike decided to pick up his guitar and join in. Mike also owned a bass, which he played in E.B.S. but it was Mike Myres who picked it up this day and joined in on the impromptu jam.

Within the blink of an eye we were a cohesive unit, and we were jamming out some pretty funky shit. The night came quickly, as time flies when you're having fun, so we called it quits. We were all so pumped up over it that we were right back there the next day jamming again. We even started recording the jams on to cassette tapes, which I started bringing home to write and record lyrics over. I think all in all we only ever completed two songs in that fashion, but I had no clue these jams would be the foundation to an on going, growing entity that would manifest itself full form in the years to come...
Posted by Kabal at 08:17

Email ThisBlogThis!Share to TwitterShare to FacebookShare to Pinterest
Labels: Simpsons