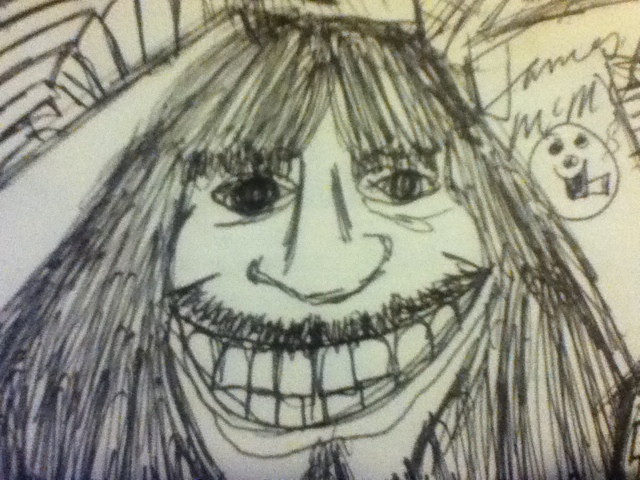 Another friend of mine who was somewhat of a musical influence was my buddy James, who we later referred to as "Jimmy James" the title of a Beastie Boys song. I had known of James since my days in middle school, he was older than me, and my earliest memory of him was seeing him playing handball on lunch one day at school, I was envious of his long, flowing locks and the fact that he had one of the sweetest moustaches you could ever see on a kid in grade 8. By the time I got to high school there he was again, only now his hair was longer than ever. I had also remembered him being a fairly large guy, but here I was now almost a foot taller than him, I guess I had grown a bit since grade 6.

James was in a few of my high school classes, and he was hanging around with the thrasher crew, so eventually we ended up in the same circle of friends. James was very quiet such as myself, he was the type to just sit back and be observant of a situation, and generally the last person to give any input. Also like myself he would be the first person to laugh at you and point out your short comings in a situation as well. Perhaps that's why we ended up hitting it off so well.

James didn't like school much, and in turn he didn't show up much, to the point that he ended up getting expelled from high school all together. I was somewhat envious that he got to just sit at home now and play video games all day on the new sega genesis console, although part of me also worried about him and his future. I spent many a days and nights at his place, usually smoking and playing sega all night while he continuously spun vinyl on the turn table. Looking back now I guess we had a lot on common. Our quiet nature, strange sense of humour, video games, and music. In particular The Beatles, as we had both been long running fans of the band since  our early childhood.

Upon first glance one might think James was your typical thrasher, but in reality he wasn't. Sure he loved Metallica as much as the next guy, but James re-opened me up to the roots of this music. Jimmy loved bands like The Who, Black Sabbath, Hendrix, The Doors and of course The Beatles. I'm not sure if his Scottish heritage had anything to do with it but I always felt it did. His biggest guilty pleasure however was Van Halen, that was his band. I remember being overwhelmed the first time I ever saw his bedroom and every single inch of it was covered in Halen pics with the exception of his floor and bed, although his headboard was covered too!

Two bands in particular that James listened to really stuck with me, Motörhead and The Ramones. Although I was already familiar with these bands, it was through James that I heard the majority of their records, the good, the bad and the ugly so to speak, and through these listenings I learned just how important they both really were. Motörhead was an extremely important band for the shaping of thrash metal & crossover, as were The Ramones that same importance to punk and hardcore. Perhaps that's why I respected James so much, he unknowingly seemed to listen to the most elite and important bands in the history of rock & roll unintentionally, simply because like me, he was just another guy that loved music...