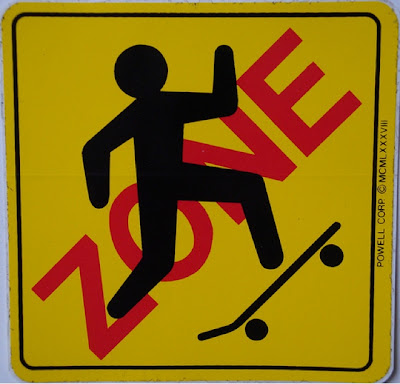 Midway into spring we caught wind of a show that was taking place featuring Epileptic Brain Surgeons along with a few other local Toronto bands, which seemed like a regular weekend happening in those days, but the setting for this show was much more different than the usual basement bash. This particular show was taking place at an indoor skate park, something I had yet to witness at this point in my life. The perk was called "Skatezone" and from what I recall it was somewhere in the Mississauga/Etobicoke area. That was quite a jaunt from our stomping grounds in Bramalea. I didn't know how I would get there, but I knew I would one way or another.

For some reason Jerry didn't drive as he usually would have, I'm not sure if he was out of gas or if his car was in the shop, but regardless we needed to find a way there. Our parents were kind enough to help us out, My dad drove us all there and Ryan's dad picked us all up at the end of the night. Or vice verse  I can't quite remember.

From the moment we stepped in the place it was magical. The smell of sweat and stale cigarettes filled the air. Kids on skateboards were wheeling around everywhere. All you could hear were murmurs of various overlapping conversations and the sound of skateboards clacking and grinding away.
Up top of the biggest half pipe I saw the boys from EBS setting up their gear. We went and hung out with them until it was time for the show to start.

I honestly don't remember much about the opening acts, but I do remember that by the time the Surgeons started playing the place was ballistic. There was a full blown circle pit in the middle of the half pipe and I was right in the middle of the action. The boys and I started running up the side of the ramp and purposely sliding back down, crashing into the pit like a bowling ball into pins, knocking people down in every direction, it was absolute chaos. This was by far the best mosh pit I had ever been apart of to date.

One thing I noticed at the show was a group of guys around my age. I knew they were from Brampton as I had seen them around the scene, I knew they were EBS fans because I saw them at all the shows. But just who in the hell were these guys???
Posted by Kabal at 12:44