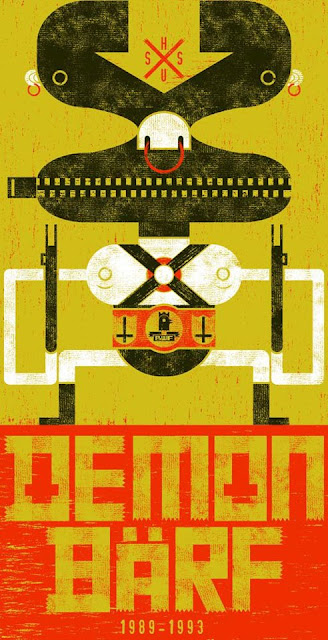 It seemed like every time my crew and I went to see an Epileptic Brain Surgeons show, there was always this other crew there marking out for them, the same guys I mentioned from the "Skatezone" post, but just who were they?

They were a colourful group to say the least, one of them was a black guy but he was always sporting Anthrax shirts, another of the guys looked like a little white rasta metal head, one of them was a bigger, stockier fellow with a sweet feathered mullet, then there was a tall, slim guy with a bowl cut who reminded me of Tony Hawk, and lastly there was a guy who looked more goth or industrial, he wore all black mostly and had glasses.

I don't know what it was about these dudes but I didn't like them one bit, mind you I'm a bit quick to pull the trigger on judging people I don't know. To be quite honest I didn't even have a reason not to like these guys, but in my mind there was some form of unspoken competition in regards to who the biggest EBS fans were. I clearly felt my crew were the ultimate EBS fans, yet these guys probably felt the same way about themselves. This meant war!

The lines in the sand were quickly disappearing as the crossover movement flourished, and I was happy and proud to see punks, thrashers, & skin heads co-existing in the scene together. So why did I loathe these guys so much? The scene was clearly one of unity, yet I felt these guys should have been excluded from it for some unknown reason. Looking back on this I think I was somewhat jealous & greedy, I didn't want to share my favourite local band with strangers I considered outsiders.

One day at the Bramalea City Centre I was hanging out with Pooh & Waller in the food court when we were approached by "those guys" They shot the shit with the EBS duo for a bit, and then they were on their way. As soon as they were out of earshot I immediately asked Pooh & Waller "Who in the fuck are those clowns? I see them at every godamn show!" Pooh went on to tell me they were some guys from their high school, Chinguacousy. They were in the same grade as me. Where I was lucky enough to have Myre & McCuish in my high school, they were lucky enough to have the other half of EBS at their school.

Pooh went onto tell me all their names. The black guy was Kevin, the white rasta was Gregg, the stocky mullet man was Paul, the Tony lookalike was named Mike, and the goth looking guys name was Matt. Pooh also went on to tell me that they had their own band as well, they were called Demon Barf.

Little did i know at the time, these guys would go on to be good friends of mine in the years to come, but in the heat of the moment I only had one thought on my mind....this was war!
Posted by Kabal at 12:40